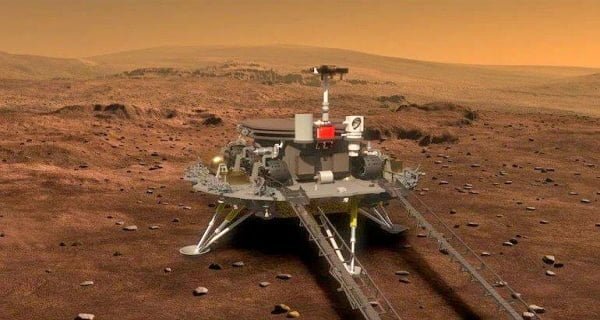 Beijing: China’s space agency China National Space Administration (CNSA) confirmed on Saturday morning that a spacecraft carrying the country’s first rover to Mars has landed on a ‘red’ planet. He told the spacecraft ‘Tianwen 1’ carrying an orbiter, a lander, and a rover launched on 23 July 2020.

The official news agency Xinhua reported that this is China’s first step towards reaching Mars with the aim of completing orbiting (orbit orbit), landing and roving in a mission for further exploration in the solar system. The spacecraft entered the orbit of Mars in February after traveling for nearly seven months and spent more than two months identifying possible locations to land on the planet. The rover that reaches Mars weighs around 240 kg, has six wheels and four solar panels and can rotate up to 200 meters per hour.

It has six scientific instruments with a multi-dimensional camera, radar, and meteorological measure. It is expected to work on Mars for about three months. Space ships from the United Arab Emirates, the United States, and China recently entered the orbit of Mars. NASA’s Percussion Rover reached Mars on February 18 after a journey of about seven months. Before this, the US, Russia, European Union, and India successfully sent spacecraft to Mars. In 2014, India became the first Asian country to successfully send its spacecraft into Mars orbit.

10/04/2021/6:41:pm
Sonipat: The agitation of the farmers on the boundaries of Delhi (Delhi) against the new agricultural laws of the Central Government is going on...

150 Taliban insurgents give up fighting in Afghanistan

06/10/2020/4:22:pm
Sari Pul: A total of 150 Taliban militants have given up fighting and handed over their weapons to police in Kohistanat district of Afghanistan's...