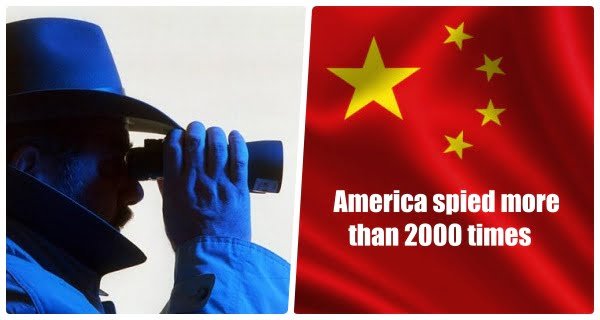 Beijing: The People’s Liberation Army (PLA) of China has accused America of spying more than 2 thousand times. Chinese researcher Cao Yanzhong told an annual military conference that US warships and aircraft conducted spying missions against China this year. He claimed that as part of these operations, the islands under Chinese control and the Chinese coast along with reefs in South China Regards were also targeted. Cao is a researcher at the PLA’s Army Science Academy. The relations between America and China (China-US relation) are in the weakest position at this time.

Cao told a panel of the 10th Xiangshan Forum that such close espionage recurrently poses a threat to China’s sovereignty and security. Regional tensions also increase. He said such acts could also increase the risk of armed conflict. America and China are currently embroiled in a dispute on many issues including trade. There is also tension between the two countries over China’s aggressive stance in the disputed South China Sea and human rights issues in Hong Kong, Tibet, and Xinjiang provinces.

The conflict between the two countries
There is also tension between the two countries over Beijing’s aggressive military stance in the disputed South China Sea and human rights in Hong Kong, Tibet, and Xinjiang provinces. China claims sovereignty over the entire South China Sea. Vietnam, Malaysia, the Philippines, Brunei, and Taiwan oppose this claim.

The news agency PTI quoted a report in the South China Morning Post on Thursday saying that Cao said that the most important thing to do at this time is not to get fired. For this, America should stop spying immediately.

Earlier this month, China expressed concern over reports of damage to a US nuclear submarine in the South China Sea and called on the US to provide details and the location of the incident. China claims sovereignty over the entire South China Sea.

19/09/2020/9:38:pm
Tehran: The head of Iran's paramilitary force Revolutionary Guard on Saturday threatened to avenge all those involved in the US drone's action to kill...

25/10/2020/10:41:am
Nagpur: On the special occasion of Dussehra, Mohan Bhagwat, the RSS chief, performed Shastra Pooja at the Rashtriya Swayamsevak Sangh (RSS) headquarters in Nagpur....

17/05/2021/9:28:am
New Delhi: The country currently dominates the second wave of Corona. But now there is a relief, the pace of this terrible infection in...

27/08/2021/8:31:pm
Mumbai: “A winner doesn't do any different work, he does everything differently…” These were the words of Himani Bundela, a blind contestant from Agra,...