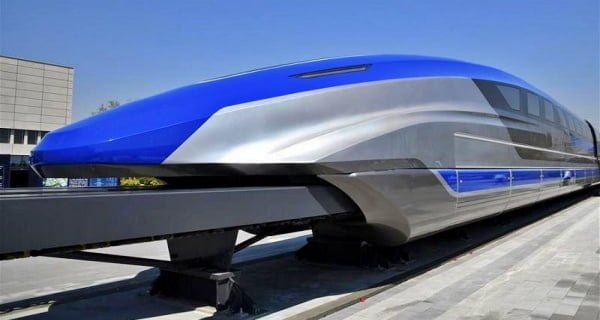 Beijing: China has the world’s largest fast-speed network, which is spread over 37 thousand kilometers. The fastest commercially operating train Shanghai Maglev is also here. Now China has introduced a prototype of its new high-speed Maglev train. This train can run at a speed of 620 km per hour. This train runs on high temperature superconducting (HTS) power. This makes it appear as if it is floating on magnetic tracks. Therefore, this train is also being called a ‘floating train’.

It is being claimed that this Maglev train can become a good option for people traveling by airplane in the country. Right now the maximum speed of the airplane here is 900 km / h.

China is making world’s fastest train, can reach Delhi from Lucknow in an hour
This 21 meter long prototype of this train was launched in front of the media in Chengdu. University researchers built a 165-meter track, which displayed the look and feel of the train. Professor He Chuan, who works on the prototype, says that this train can be operational in 3-10 years. He also mentioned that Sichuan has scarce resources that can be beneficial for the construction of permanent magnetic tracks.

Winter Olympics preparations
Maglev, the country’s fastest speed train, started running in 2003. Its maximum speed is 431 km / h. It connects Shanghai Pudong Airport with Longyag Road on the eastern tip of Shanghai. China wants to develop more infrastructure by 2022, when the winter capital is to be held in the country’s capital, Beijing.

This month, a special bullet train has run in China, which is designed to operate at low temperatures. The CR400AF-G train can also run at a speed of 350 km per hour at a temperature of -40 ° C.

This is the goal
Now the next step in this direction is industrialization of technology, but experts say that before that all kinds of tests will have to be done which can take years. After that its commercial use is possible. China aims to start commercial use of trains running at a speed of 500 km per hour by 2025.

What will be the benefit of this project
The 600 kmph high speed Maglev transport system was launched in China in 2016. It is a major project of the advanced rail transit program of China’s Ministry of Science and Technology. High-speed Maglev train is characterized by very high speed, safety, reliability, large passenger capacity, timely performance, environmental safety, minimal maintenance costs. Its goal is to provide jet vehicle passengers with faster vehicle resources for more than 1500 km on land, including a 1200 km distance to Beijing Shanghai. If preparation time is included in this, then this distance from the aircraft will be fixed in four and a half hours, five and a half hours by fast train, and in three and a half hours from Maglev.

14/10/2020
Amsterdam: Coronavirus continues to wreak havoc around the world for the past 8-9 months. Every day new and new denials are coming about the...

This rapper has got a prized diamond worth Rs 175 crore on his forehead,...

05/02/2021
Washington: Hobby is a big thing! In the US, rappers are known for their different styles. But 26-year-old Symer Basil Woods, the well-known American...

06/02/2021
Washington: The White House said on Friday that the Joe Biden Administration believes that there is a strategic competition between the United States and...

BMW Group India to Increase Prices by up to 3 Percent From 1 November...