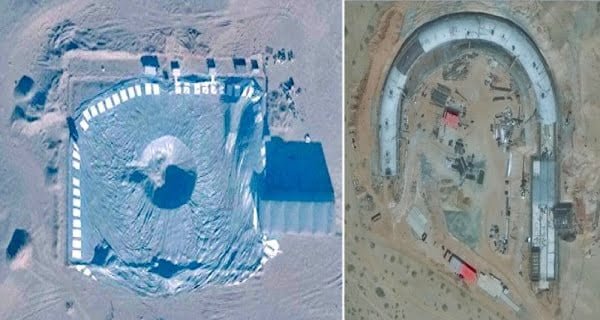 Washington: Based on an analysis of photographs of recent construction in the Chinese missiles launched from a satellite, a US expert said that China probably has 16 new underground intercontinental ballistic missiles (ICBM) is manufacturing silos. Hans Christenson, who has been monitoring the US, Russian and Chinese nuclear power for a long time, said that it appears that China is rapidly working towards developing the capability to launch new nuclear missiles from underground silos so that someone Paramaranu could improve his ability to take immediate action in the event of an attack.

Christenson said the photos indicate that China is “preparing to counter a growing threat from the US.” The US has been citing China’s nuclear modernization to justify spending hundreds of billions of dollars over the next two decades to build its new nuclear arsenal. While there is no indication that the US and China are moving towards armed conflict, Christenson’s report comes at a time when tensions between the US and China have increased on many matters, from trade to national security. is.

The Pentagon declined to comment on Christenson’s analysis, but it said in its annual report on Chinese military development last summer that China was working towards increasing readiness of its nuclear forces in the peacetime. ‘Federation of American Scientists’ analyst Christenson said the commercial satellite photos he received showed that China began building 11 underground silos at the end of last year in a large missile training range near Geelantai in north-central China. Construction of five other silos began earlier.

Apart from the 16 silos which Christensen has marked, China also has 18 to 20 silos, which he operates with the old Inter Continental Ballistic Missile (ICBM) DF-5. Christensen said, “It is worth underlining that even if China doubles or triples its ICBM silos, their numbers will still be modest compared to the ICBM silos of the US and Russia.” He said that the US Air Force has 450 silos and Russia has 130 silos.

Approval of new education policy, HRD will now be called Ministry of Education

29/07/2020
New Delhi: The Union Cabinet on Wednesday approved the new education policy. Also, the Ministry of Human Resource Development has been renamed as Ministry...

04/01/2021
Karachi: At least 11 coal miners were shot and killed on Sunday after gunmen abducted them in the troubled southwestern Baluchistan province of Pakistan. The...

First glimpse of RRTS train comes, will run at a speed of 180 km...

26/09/2020
New Delhi: The Central Government on Friday presented the first glimpse of the Regional Rapid Transit System (RRTS) train, whose design is inspired by...

13/11/2020
Mumbai: American singer Cardi B is in the news these days. Recently, Cardi B had a photoshoot as Goddess Durga. After which a lot...