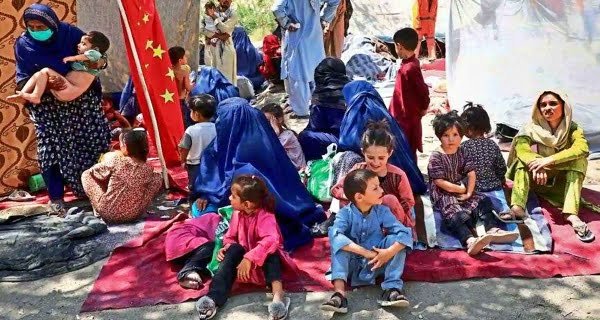 Kabul: After the fall of the Afghan government at the hands of the Taliban, there are only a few limited options left in front of the world. In recent weeks, the international community has warned of a rapidly escalating humanitarian emergency in the country and called for aid to millions of Afghans before winter. Meanwhile, the new Taliban regime has systematically denied the Afghan people the right to vote. Their fundamental human rights have been severely restricted – particularly the rights of women and girls to education. For the time being, there is a possibility of famine due to the Taliban and the international community not paying enough attention to the immediate humanitarian needs of the country.

The United Nations estimates that almost half of the population of Afghanistan or about 23 million people are going to be deprived of food in the coming months. By the end of the year, 32 lakh children under the age of five are expected to suffer from malnutrition. However, the country’s long-term needs are not so easily separated from these more acute concerns.

In such a situation, the international community must find a way to save its people from a humanitarian emergency without encouraging the Taliban or ignoring its horrific human rights record. The threats of racial discrimination and gender apartheid are real. would be equally harmful to the future of the civilian population of Afghanistan.

Growing humanitarian emergency
Before coming under Taliban control in August, Afghanistan was going through a major humanitarian crisis. Last year nearly half the population was living below the national poverty line. It was a combined result of years of fighting insurgent violence, severe drought in some parts of the country, and problems caused by epidemics.

The crisis worsened with the fall of the government at the hands of the Taliban. Foreign assets of Afghanistan – about 9.5 billion US dollars were immediately frozen in the US. Due to this the financial and public sectors of the country almost came to the brink of collapse. According to the International Monetary Fund, the country’s economy is expected to shrink by 30% this year, due to which people will fall into more poverty. The United Nations estimates that 97% of Afghans could live in poverty by the middle of 2022.

The Taliban have sought recognition from the international community and the release of Afghanistan’s financial reserves in the US. The European Union has also cut its development funding for the country, while the IMF has suspended access to the Taliban to the tune of more than US$400 million. The World Bank has stopped the release of US $ 800 million in aid to Afghanistan this year.
At a time when Afghanistan is in the grip of a humanitarian disaster, there are great concerns about whether emergency aid can be distributed in a transparent and fair manner without reinforcing the repressive and outcast regime of the Taliban. Despite the Taliban’s promise to form an ‘inclusive’ government, its all-male caretaker cabinet, in contrast, is dominated by radical factions. The leader of the Haqqani terrorist network, Sirajuddin Haqqani, is the new minister of interior affairs, while his uncle, Khalil Haqqani, is the minister for Afghan refugees.

However, the IMF has warned that any money going to Afghanistan can be used for terrorism and money laundering. The Taliban’s blatant disregard for human rights also raises questions about its ability to distribute aid fairly. The gender discrimination of the group is also a matter of concern.

For example, women have been excluded from the workforce. Barring a few essential roles in primary education and health care, most women have been stripped of public sector jobs, leaving countless families deprived of their income. Millions of Afghan girls have also been banned from attending schools and universities.

These policies are affecting the most marginalized sections of society, who are also most likely to be in need of humanitarian aid. The Taliban’s severe sanctions on female aid workers have also limited access to aid to women in much of the country. In addition, the Taliban is engaged in large-scale land grabbing by forcibly evicting members of the Hazara minority from their homes and farms. Human Rights Watch says others linked to the former government have also been targeted as ‘collective punishment’

29/07/2021/9:58:am
Mumbai: Crocodile is being seen in some residential areas of Sangli after the floods due to heavy rains in Maharashtra. One such case has...

24/08/2021/10:31:pm
Kabul: After the Taliban's occupation of Afghanistan, news of its brutality is also coming every day. Even though the Taliban are showing themselves to...

26/10/2020/11:57:pm
New Jersey, United States:  Triton-EV, the revolutionary new subsidiary of Triton Solar, a leader in solar panel and battery engineering, announced today that it has...

14/09/2021/12:57:pm
Beijing: The Dragon has retaliated on the US Navy challenging the Chinese Navy in the South China Sea. China has landed 4 deadly warships...

27/09/2021/9:58:am
Lansing (USA): Three people from Virginia were killed when a small plane crashed on Sunday in South West Virginia, USA. Officials gave this information....