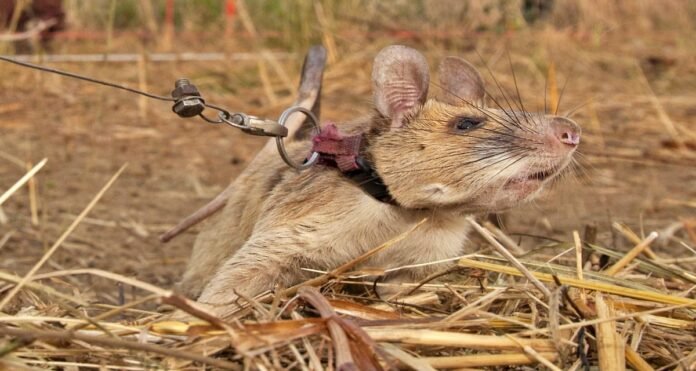 New Delhi: Animals and birds play an important role in biodiversity. At the same time, some animals and birds are so smart that they even save the lives of humans and get them out of trouble. Today we are going to tell you about one such mouse, who devoted his whole life to the service of his country. This rat named ‘Magawa’ has saved many lives by discovering landmines and other explosions. But the sad thing is that this ‘Hero Rat’ has said goodbye to the world at the age of eight.

This rat was one of the most successful rats trained by the Belgian charity Apopo. Born in the midst of bamboo forests in 2014, Magawa was later trained by a Belgian organization to identify explosives. According to the organization APOPO, Magawa showed great bravery with his agility.

Awarded PDSA Gold Medal
This Hero Rat discovered landmines in 225,000 square meters of land during his career span of five years. Skilled in finding bombs underground, the equivalent of about 31 football pitches, this mouse has so far saved thousands of lives by discovering about 72 landmines and 38 explosives. Magawa was awarded the PDSA Gold Medal in 2020. And he became the first mouse to get the medal.

thank you for the incredible work
According to Sky News, a year later Magawa, also known as ‘Hero Rat’. He retired. After which his baton was brought to another rat named Ronin. APOPO, who trained hero Rat Magawa after his death, said that Magawa died “peacefully” over the weekend after being in ‘good health’ and spending his last few days ‘playing with his usual enthusiasm’. “We all feel the loss of Magwa and we are grateful for the incredible work they have done,” the Apopo organization said.

Scindia said: I am the dog who also protects the owner and also attacks...