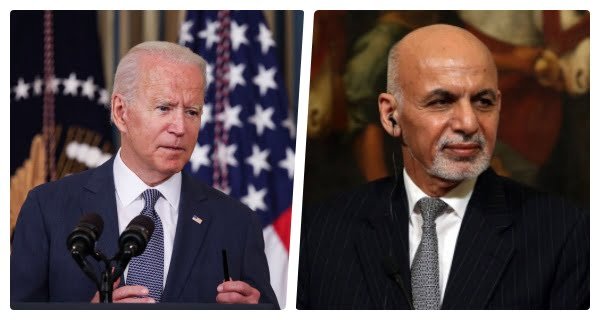 Washington: US President Joe Biden spoke to his Afghan counterpart Ashraf Ghani on the phone and assured him that America will continue to help his country on diplomatic and humanitarian grounds. This assurance was given at a time when the Taliban is increasing its presence in Afghanistan. This has put the US-backed Afghan government under pressure. According to a White House statement, Biden and Afghan President Ghani had a phone conversation on Friday. The two leaders agreed that the current Taliban attack is contrary to support for talks.

Biden told Ghani that the US would continue to support diplomatically to find a permanent and political solution. White House spokeswoman Jen Psaki said, “We believe that lasting peace in Afghanistan can only be achieved through a political solution,” White House spokeswoman Pretr reported. We will continue to provide assistance to the government here on humanitarian and security grounds. The White House also reported that President Biden also announced emergency assistance of $100 million (about Rs 740 million) for Afghan refugees.

According to the news agency ANI, the US, the European Union, and NATO ([North Atlantic Treaty Organisation)] have appealed to the Taliban to stop violence in Afghanistan and join peace talks. The situation in Afghanistan was discussed at a meeting of special envoys of the US, European Union, NATO, France, Germany, Norway, and Britain in Rome on Thursday.

23/09/2020/10:50:am
Islamabad: Pakistan on Tuesday honored the outgoing Chinese Ambassador Yao Jing with the country's second-highest civilian honor, Hilal-e-Pakistan, for his services to improving bilateral...