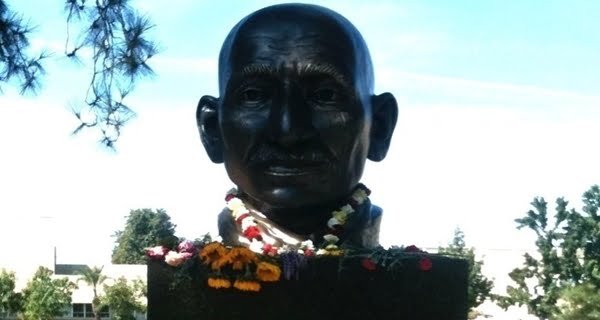 Washington: The University of California of America has dismissed the possibility of removing the statue of Mahatma Gandhi. In fact, an online petition demanded the removal of the statue to show ‘solidarity with the Black Lives Matter campaign’. A student of Indian origin at California State University in Fresno filed an online petition after the murder of black man George Floyd. Floyd was killed by police in Minneapolis on 25 May. There were widespread protests in the country against the incident and many statues and national monuments were damaged in Washington DC, including the statue of Mahatma Gandhi.

University President Joseph Castro said that in the Fresno Peace Garden, statues of Mahatma Gandhi, Martin Luther King, Caesar Chavez and Jane Adams have been planted in a spirit of peaceful and constructive activism. He said in a statement, “We appreciate those who have a clear vision for history and those who have shaped it, as well as appeal the importance of their enduring contribution to the creation of a just and fair society.” But they also pay attention. “

In response to the petition, Castro said, “On the basis of this, we feel that the people who are enshrined in the Fresno State Peace Guard have played an important role in history and have the courage, social justice and the world to make the world a better place.” We should continue to guide them in promoting tireless efforts. ” The online petition of university student Akhnoor Sidhu demanded the removal of Gandhi’s statue to show solidarity with the Black Lives Matter movement.

Russian female astronaut Anna Kikina flew from America for the...

Number of people who died of Covid-19 in Brazil is close...