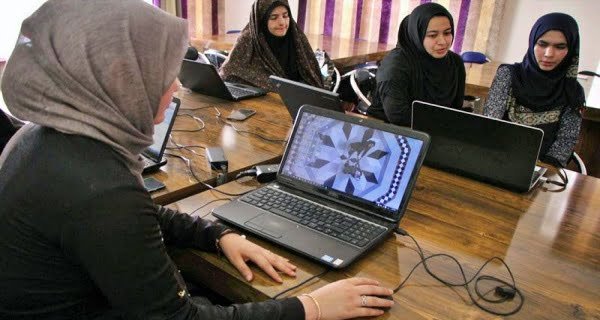 London: Imprisoned at home in Herat, Afghanistan, Zainab Muhammad recalls the old days of hanging out with her friends in the cafeteria after a coding class. Now every day she secretly logs on for online classes. His school closed in August after the Taliban took control of the country, but that hasn’t stopped Muhammadi from learning. Requesting the use of a pseudonym to hide his identity, Muhammadi said, “Danger is the only danger here for girls like me.” If the Taliban comes to know… then they can give me severe punishment. They can even put me to death.” The 25-year-old student told the Thomson Reuters Foundation over a video call, “But I have not lost hope or my aspirations. I am determined to continue with my studies.

Muhammadi is one of the hundreds of Afghan girls and women who are learning – some online and others in hidden temporary classes – despite the Taliban closing their schools. Significantly, during the 1996-2001 regime of the Taliban in Afghanistan, girls and women were denied the right to education, and their work and public life were banned.

Code to Inspire – Afghanistan’s first women’s coding academy
Fereshteh Foro, CEO and founder of Code to Inspire (CTI), Afghanistan’s first female coding academy, created an encrypted virtual classroom, uploaded course materials online, and provided laptops and internet packages to nearly 100 of her students, including Muhammadi. He said, ‘You can be locked up at home, but live the virtual world without any hesitation, without worrying about geographical boundaries. That is the beauty of technology.

Taliban has promised to let girls go to school
In September, the Taliban government said that older boys could resume school with all primary age children, but older girls between the ages of 12 and 18 were asked to stay home until They should not be allowed to return to school. The Taliban, which banned girls’ education during their last rule some 20 years ago, has promised to let them go to school because it wants to show the world that it has changed.

Taliban working on ‘a roadmap’ for girls’ education
A senior UN official who met with the Taliban earlier this month said the government was working on a roadmap, which would be published by the end of the year. Omar Abdi, deputy executive director of the United Nations Children’s Fund (UNICEF), who visited Kabul, told reporters at the UN Headquarters on October 15 that five of Afghanistan’s 34 provinces—Balkh, Jauzjan and Samangan in the north-west, were in the north. Girls are already allowed to attend secondary schools in Kunduz in the east and Urozgan in the southwest.

He said the Taliban’s education minister told him they were working on “a framework” to allow all girls to continue their schooling beyond sixth grade, which was released “between one and two months”. will go.

‘Afghan girls’ education has increased enormously, it needs to be saved’
UNESCO warned in September that there was a threat to access to education, especially for girls and women, after the Taliban took the reins of governance in Afghanistan. A new UNESCO report says that after the Taliban was ousted from power in 2001, the school-going rate of students has increased manifold in the last 20 years. The literacy rate of women in Afghanistan has doubled.

The UNESCO report states that in 2001 there were no girls in primary school, while in 2018 their number increased to 2.5 million. In Afghanistan, the number of girl students in primary schools is now 40 percent. There has also been a huge jump in the number of university goers, which are now in the thousands. About 6% of women were pursuing a college education in 2020, up from just 1.8% in 2011.

91% of corona cases in Mumbai are without symptoms, claims BMC commissioner – no...

22/11/2021/1:53:pm
Kabul: The Taliban, which occupied Afghanistan, has issued a new decree, increasing the ban on women. It has issued 'religious guidelines' on Sunday. The...

Indian Railways transport dry chilies from Guntur to Benapole in Bangladesh for the first...

12/07/2020/11:17:pm
New Delhi: Government today said that for the first time Indian Railways has loaded special Parcel train beyond the country borders to Benapole in...