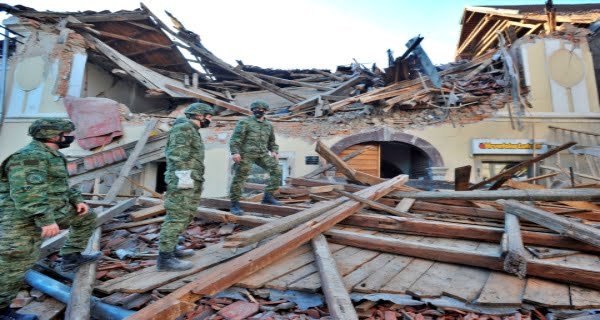 Zagreb (Croatia): The strong tremor of the Earthquake was felt on Tuesday in Croatia. Some people were injured and several houses were damaged in the south-east region of the capital. The European Mediterranean Seismology Center said a 6.3 magnitude earthquake occurred 46 kilometers southeast of the Croatian capital of Zagreb.

Initial reports said that the earthquake had caused extensive damage. Some houses got damaged and cracks in the walls and roofs of some buildings. A 5.2 magnitude earthquake occurred in this area on Monday. Croatia’s government broadcaster ‘HRT’ reported that a girl died after being buried under debris in the city of Petrinja, southeast of the capital.

After the earthquake, Prime Minister of Croatia Andrzej Plenkovic and some government ministers arrived in Petrinja city to take stock of the situation. Regional ‘N1TV’ reported that a building in the city of Petrinja, the worst affected by the earthquake, fell on a car. Fire crews took a man trapped in the car and his son to the hospital after debris was removed.

After the earthquake, people left the houses in the capital Zagreb and ran towards the roads and parks. Despite the ban imposed by the Corona virus, many people migrated from Zagreb to other places. Croatia’s media reported that some people were injured but information could not be found on how many people were injured.

The earthquake was also felt in neighboring Serbia, Bosnia and Slovenia. Officials in Slovenia said the Crisco nuclear power plant was temporarily closed after the earthquake. Located near the border, the plant is controlled by Slovenia and Croatia.

The families of many BJP leaders have also got married in another religion, is...

22/11/2020
New Delhi: The issue of Love Jihad is hot again in the country these days. Many BJP-ruled states are also working on the process...

09/10/2020
Mumbai: In September, Rhea Chakraborty was arrested by the NCB team investigating the drugs angle in the Sushant Singh Rajput case. After this, Rhea...

shock to Maharashtra government, Sushant Singh case given to CBI

05/08/2020
New Delhi: In the Sushant Singh case, Maharashtra Police and Sarkar suffered a major setback when the Center accepted the Bihar government's recommendation for...

27/08/2020
Port of Spain: West Indies all-rounder and Dwayne Bravo became the first bowler to take 500 wickets in this shortest format of cricket, playing...