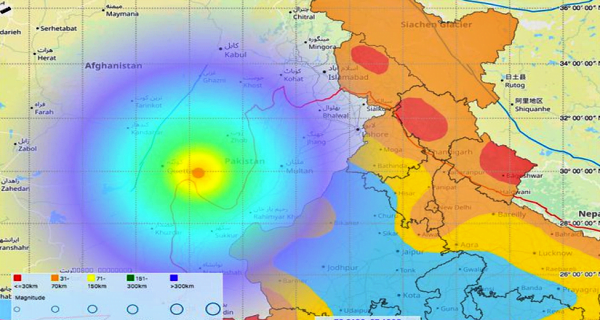 Islamabad: Strong tremors of earthquake were felt in the Harnai area of ​​southern Pakistan on Thursday. According to Pakistani media, the magnitude of the earthquake was measured at 6.0 on the Richter scale. At least 20 people have died in the earthquake. There are also reports of injuries to more than 200 people. The earthquake in Pakistan was so powerful that its effect was seen in neighboring Afghanistan, Uzbekistan, and Turkmenistan. There is also news of damage from the earthquake.

Suhail Anwar Hashmi, a senior provincial government official, said that several people died due to the collapse of ceilings and walls. A woman and six children were also among the dead. Heavy machinery has been dispatched from Quetta to help and rescue the people. At present, the injured people are being treated at the hospital in Harnai.

According to visuals coming from Pakistani media, there is no electricity in hospitals in Harnai. There the relatives of the injured people are undergoing treatment with the light of the mobile torch. According to the officials, the impact of the earthquake is in many districts, so it is not possible to tell the exact number of the injured.

‘Tiffin box bomb’ and grenades dropped by drone in Amritsar

09/08/2021/10:17:pm
Chandigarh: Ahead of Independence Day, the police have recovered a tiffin bomb containing more than 2 kg of RDX explosives from a village in...

07/09/2020/11:14:pm
Beijing, China & Paris La Défense, France: One of the most compelling features of the OPPO Watch is the eSIM-based cellular connectivity. Thales’...

01/10/2020/11:18:pm
Washington: Democratic Party candidate Joe Biden said the day after the Election Debate that President Donald Trump knew he was going to the election...