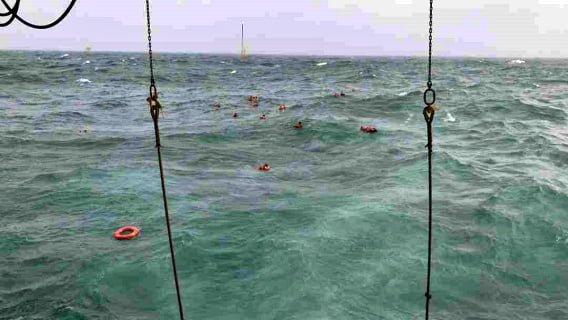 New Delhi: According to the big news, more than 100 people have been killed or missing after the boat capsized in the Democratic Republic of Congo. On this incident, the provincial officials here said that this accident happened in the Congo river. In this incident, more than 100 people aboard the boat were killed or then went missing. At the same time, according to the news agency, Nestor Magbado, spokesman for the governor of the North-Western Province of Mongala, said that 51 bodies have been taken out so far. While 69 others aboard the boat are still missing. He also clarified that only 39 people have been rescued so far in this accident.

It is worth noting that even before this i.e. on February 15, 60 people died when a boat capsized in the Democratic Republic of Congo. This accident also happened in the same Congo river. It is being told that there were more people on the boat than capacity, due to which the boat sank. Here the country’s Minister of Humanitarian Affairs Steve Mbikayi had told that there were about 700 people on this boat. He had told that this incident happened in the Mai-Ndombe province of the country. The boat had left Kinhasa province for Mabandaka the day before. The boat sank when it reached near Longgola Ikoti village in Mai-Nomadbe province.

Congo River is the only way to travel long distances
By the way, it is common to have dangerous boat accidents in the Congo River. Actually, the roads are in bad condition across the country, due to which people here give more attention to travel by boat. However, due to this, more people get on the same boat here. At the same time, even more, loads are loaded on the boat by the sailors. Due to all this, boats become the cause of accidents. Let us tell you that the Congo River is the only means of long-distance travel for the residents of Congo. Be aware that the basic economy of the Congo is very poor and therefore the government is unable to pay much attention to the infrastructure here, due to which such incidents seem to be common.

12/08/2020/9:41:am
Bengaluru: In Pulakeshi Nagar of Bangalore, the mob ransacked the police station and the Congress MLA's residence on Tuesday night. The incident occurred after...

14/07/2021/9:24:am
Srinagar: According to news, an encounter has started between security forces and terrorists in the Pulwama district of Jammu and Kashmir on Wednesday. Along...