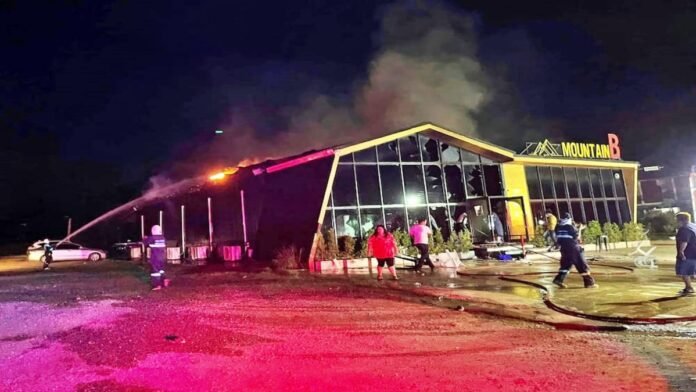 New Delhi: According to the big news coming from Thailand, a fire has broken out in a pub here. At the same time, 40 people have died in this accident so far. In this regard, Major General of Police Attasit Kichahan said that the cause of the fire is not yet known. At the same time, 4 women were also included in those who died. According to the police, the death toll may increase here.

According to the information, this incident of fire in the nightclub took place in the Sattahip district of Chonburi province. It is said to be located in the southeast of Bangkok, the capital of Thailand. According to the local police on the matter, the fire broke out at Mountain Bee nightclub around 1 pm last night. All those involved in the casualties are said to be citizens of Thailand. The Bangkok Post has reported that 40 people have died due to scorching in the fire, quoting Sawang Roznathammasthan Foundation, which is engaged in relief and rescue work.

Let us tell you that this nightclub was famous for its colorful nights. A large number of Indian tourists also used to come here. At the same time, in the video of this fire that went viral on social media, people are seen running toward safe places. Here many people were seen screaming to save their lives. The cause of the fire is yet to be ascertained. The investigation into the incident is ongoing.

11/04/2022/12:26:pm
WhatsApp, the meta-owned instantaneous messaging app comes with many helpful options that permit customers to do far more than simply staying in contact with...

10/02/2022/8:58:pm
Mumbai: Reserve Bank of India Governor Shaktikanta Das has clarified that private cryptocurrency poses a threat to macroeconomic and financial stability and challenges on...

Attention! The disappearance of 10 passengers who came to Bangalore from African countries caused...

23/08/2020/10:14:am
Mumbai: Even though the celebrations of Ganesh Chaturthi are not being held on a large scale in the Corona period, people are still enjoying...

First death after lockdown in Shanghai, 3 people died in a...