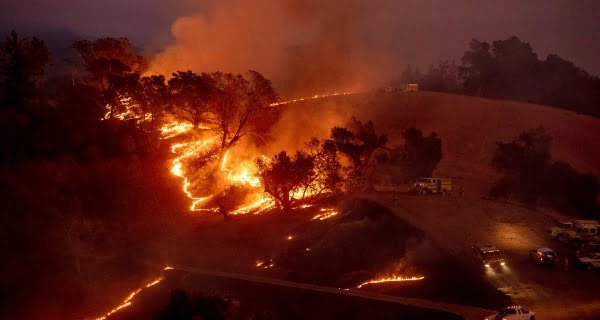 Shaver Lake (US): According to the American Forest Service, this year, 2 million acres of forest in California have been exposed to fire and they are in danger of being destroyed. Has happened. The US Forest Service also announced Monday the closure of eight national forests located south of the state of California. Generally, arid California has the highest risk of wildfires in California.

Two of the three major wildfire incidents in the state’s history are wildfires in the San Francisco Bay Area that are burning. 14,000 firefighters are struggling to control these fires and dozens are around California.

Regional forest guard Randy Moore said, “Wildfires throughout California are dangerous and should be taken seriously.” “The current fire is very complex and there is a possibility of fire in other areas as well,” he said. The weather is getting worse and we do not have enough resources to control the fire. ” It is noteworthy that earlier in 2018, 19.6 lakh acres of forest were destroyed due to fire.

05/09/2020/10:25:pm
Bhopal: In Madhya Pradesh, the amount of subsidy received in the electricity bill will be deposited in the consumer's account in the coming days....

Government changed rules for people coming from abroad, will be applicable...

Russian army is getting tired of fighting Ukraine, Putin has started...