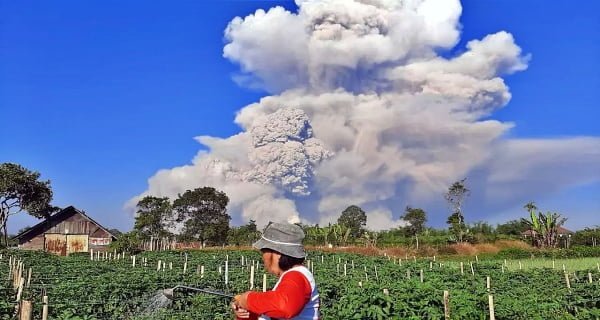 Jakarta: On Tuesday, 13 explosions occurred at Mount Sinabung in Volcano, Indonesia. The first major blast took place in August 2020. However, there is no news of any casualties in these explosions in this volcano. According to local disaster management officials, after the explosion in Mount Sinbung on Tuesday, there was a cloud of smoke and ash up to several kilometers in the sky.

According to the Center for Volcanology and Geological Hazard Mitigation (PVMBG), Mount Sinbung, located in northern Sumatra province, is about 2460 meters high. It was activated in 2010 after remaining sober for 400 years. In 2013, it started exploding.

Weather Network meteorologist Tyler Hamilton has attributed the frequency of Mount Sinbung’s eruption to its Ring of Fire. The Ring of Fire is an area in the Pacific Ocean where seismic activity occurs. People living nearby have been clearly told about Danger Zone. People have been asked to wear masks as a precautionary measure to protect themselves from the smoke. Also, be cautious about the flowing lava. PVMBG has said that Mount Sinbung is still on Level 3 alert.

Earlier in 2014, 16 people died in the volcanic eruption. This happened after the blast by spraying ash with the surrounding villages. Indonesia is made up of around 17000 islands. It has a total of 130 active volcanoes.

12/12/2020
Lucknow: Yogi Adityanath government (Yogi Government) has taken a big decision in Uttar Pradesh. Now, Doctors who do PG in the state will have...

26/10/2020
Mumbai: Director Imtiaz Ali's film 'Jab We Met' made Kareena Kapoor, who appeared in the song, the greatest actress of that time. On the...

The third phase is important for the BJP, all eyes are on these seats...

06/11/2020
Patna: In the politics of Bihar, it is said that on whom Mithilanchal and Seemanchal showed mercy, are set to form their government in...

12/03/2021
Nagpur: In view of the increasing cases of Corona virus, there are preparations for lockdown in Nagpur. On Thursday, Maharashtra Chief Minister Uddhav Thackeray...