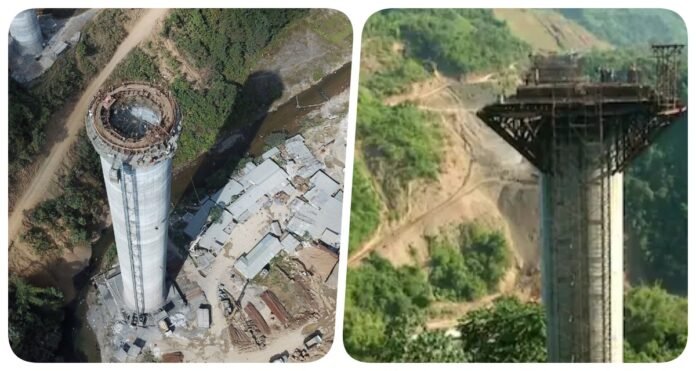 Imphal: Indian Railways keeps on achieving many achievements in the course of laying the railway line. Whether it is to build an underpass in a very short time or to build a rail bridge at the highest altitude, the railways are always ahead in these things. Now the Railways has done something similar again. High pillars are being constructed for the bridges being built under the Jiribam-Imphal Rail Line being built in Manipur by the Railways.

Railway has also built the pillar of the world’s highest railway bridge during the construction of this railway line of Manipur. Its total height is 141 meters. It is part of the Jiribam-Imphal rail line. This railway line is 111 km long. This rail line connects Imphal to the broad gauge network of the country.

Earlier, the highest pillar of the railway bridge was in the Mala-Rijeka Viaduct of Montenegro, Europe. Its height is 139 meters. Project Chief Engineer Sandeep Sharma says that after the completion of this project in Manipur, a distance of 111 km can be covered in 2 to 2.5 hours. At the same time, the distance from Jiribam to Imphal is 220 km. It can be completed in 10 to 12 hours.

He says that after the completion of the construction, this pillar built on the Noni valley will become the highest railway bridge pillar. He has informed us that the construction work of this bridge is likely to be completed by December 2023.

England secured their first win in the history of T20 World Cup against West...

21/09/2021/9:01:pm
Washington: US President Joe Biden greeted the Jain community on the concluding day of the Paryushan and Dashlakshana festival. There are more than 150,000...

18/08/2020/12:18:am
Srinagar: In the Kulgam district of Jammu and Kashmir, militants have attacked the bunker of the Central Reserve Police Force. Terrorists have carried out...