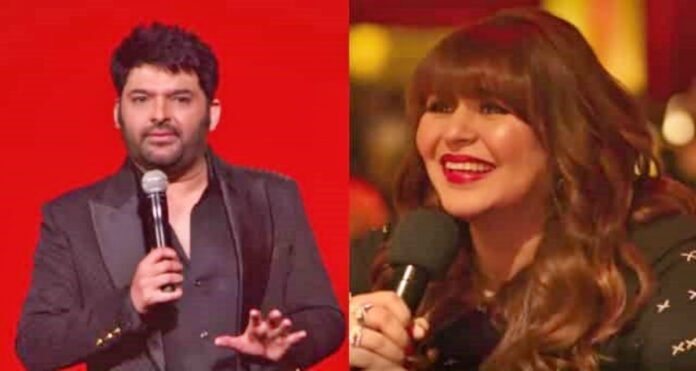 Kapil Sharma often stops speaking to people with his apparent reply. Good celebrities can’t stop laughing in front of Kapil. Kapil has often mentioned that this style of comedy in him has come from his mother. But let us tell you that Kapil’s wife Ginni Chatrath is no less in terms of comedy and sense of humor. We are not only saying this, but the proof of this has also come to the fore. Kapil’s wife Ginni is going to be seen sitting in the audience in his digital debut show ‘Kapil Sharma: I Am Not Done Yet’. In this show, on a question of Kapil, Ginni gave such an answer that Kapil’s speech stopped as soon as he was standing on the stage.

Let us tell you that Kapil Sharma is going to make his digital debut on Netflix for the first time. This special show on Netflix will be Kapil’s standup, in which he will be seen telling people about his real life.

In this standup show of Kapil, his wife Ginni Chatrath, mother, Bharti Singh, Sudesh Lahiri, Krishna Abhishek, will all be seen sitting in the audience. A new promo of this show has surfaced. In the new promo, Kapil is seen asking his wife, ‘After all, what did you think about this scooter guy (Kapil Sharma) boy, did you fall in love?’ On this Ginny lifts the mic and says, ‘I thought that everyone loves the money person. Let’s do it, I should do good for this poor.’ Hearing this answer from his wife, Kapil stopped speaking standing on the stage.

This show of Kapil will be released on Netflix on January 28. With this show, Kapil is entering the world of OTT for the first time. Kapil told in his opening video how he will be seen talking about his personal life in this show.

27/10/2020/9:56:am
Bengaluru: The Indian Institute of Management (IIM) is a postgraduate program of Bengaluru in the list of top 100 global courses. IIM Bengaluru's Postgraduate Program...

31/08/2020/3:17:pm
New Delhi: Union Home Minister Amit Shah, who was admitted to AIIMS here on August 18 for care after recovering from Coronavirus infection, was...

Gold has become 35 percent costlier so far this year

AIIMS report: Sushant Singh Rajput’s death is a case of suicide and not murder

08/09/2020/8:07:pm
Taipei: Police have arrested at least 23 people in connection with a demonstration last week against the decision to place the Mongolian language in...