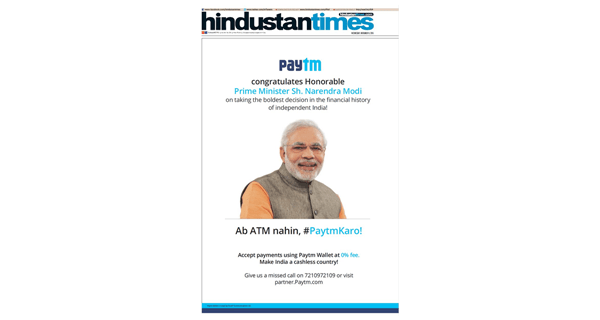 New Delhi: India on Monday banned 59 apps originating from China, including very popular ones like the short video platform TikTok, UC Browser, file sharing app ShareIt, and CamScanner, which allows iOS and Android devices to be used as image and document scanners. But surprisingly the Indian Government has left Paytm a popular online payment platform, this company is having 49.34% Chinese funding. In November 2016 This company had a huge advertising campaign for online payment and used Primeminister Narendra Modi as a model in their full-page advertisements.

Paytm Mobile, is an Indian e-commerce payment system and financial technology company based in Noida, fondly abbreviated to PayTM and pronounced similar to ATM. It supports 11 native Indian languages and offers online uses, with examples including but not limited to recharges, bill payments, and event bookings. It is also integrated with an in-store payment facility that can be utilised to quickly pay in any shop with a PayTM QR Code.

According to sources from within the company, there are over seven million merchants across India utilizing their QR facility to accept bank-to-bank money transfers. Founded in August 2010 with a USD 2 million investment, it started off as a prepaid mobile and DTH recharge platform. Later growths and expansions have made it into the e-commerce giant that it is today.

The USD 10 billion giant’s first investment was provided by its founder, Vijay Shekhar Sharma, with a relatively measly USD 2 million. This was enough to get the company up and running at the start. As the business expanded to cover more ground in the e-commerce industry, money poured in to help and accelerate the growth of the organization.

Apart from money-wise growth, PayTM has also grown massively in terms of networks and partnerships. Its PayTM Wallet product was added as a mode of payment by Indian Railways and Uber, and began powering the payment gateway for Indian Railways gradually. It networks with all of its merchants with the Business With PayTM applications, helping it cross the seven million threshold. It is also partners with AGTech in mobile gaming, and Citibank in credit card services.

Both major shareholding corporates of PayTM – Ant Financials of the Alibaba Group, and SoftBank Vision Fund – are China-based organizations, with a combined shareholding stake of 49.34%. This means that almost all major decisions regarding their businesses and other dependencies are in the hands of two Chinese venture capital corporate organizations, unless every other institution holding PayTM shares decide to go against them.

18/04/2022/9:16:pm
Kyiv: The war between Russia and Ukraine has been going on for the last 54 days. Russian troops intensify attacks on Ukrainian cities. According...

20/06/2022/8:58:am
New Delhi: In protest against the 'Agneepath' military recruitment scheme, some organizations have announced a Bharat Bandh today. Keeping this in mind, the state...

02/01/2022/9:30:pm
American singer Katy Perry is quite famous for her brilliant and powerful voice. She often attracts her fans to her side with her creative...