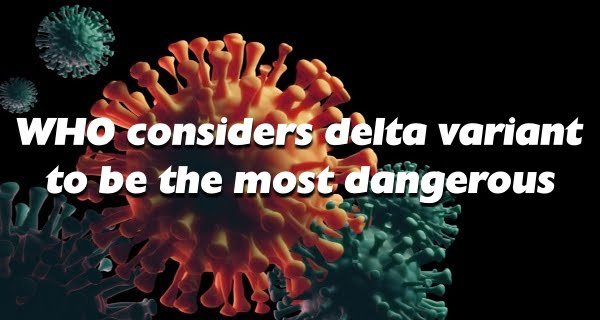 New Delhi: The World Health Organization (WHO) says that the Delta Covid variant is currently the most effective infectious virus strain, which is reported to be found in 185 countries as of 21 September. In the sample data collected by GISAID between June 15 and September 15, delta variants have been found in 90 percent. The World Health Agency gave this information during its weekly pandemic update. GISAID stands for Global Initiative on Sharing Avian Influenza Data, a universal database.

Maria Van Kerkhove, technical chief of the World Health Organization, says that alpha, beta, and gamma strains are currently less than one percent, that is, the delta is mainly present in the world. He says that Delta is more infectious and powerful. It has replaced all other virus strains.

At the same time, the UN Health Agency has improved its classification on ETA (found in 81 countries), iota (found in 49 countries), and kappa (spread in 57 countries) from Variant of Interest to Variant Under Monitoring. This is because a decrease in their number has been seen around the world. This improvement shows how effective and fast the delta variant is spreading around the world.

According to a report by the US Centers for Disease Control and Prevention, the rapidly spreading delta variant has also made inmates lodged in a federal prison in Texas a victim. Here both the fully vaccinated and those who have not been vaccinated have infected both types of prisoners. Of the 233 people in jail, 79 percent were vaccinated against Covid-19. Between July and August, 74 percent of the jailed population was found to be infected with Kovid. This information came from the weekly report.

02/12/2021/8:52:pm
New Delhi: The new variant of Coronavirus, which appeared in South Africa, Omicron has knocked in the country. Giving information on Thursday, the government...

Chinese scientists claim to have found 24 types of ‘coronavirus’, said – four are...

12/06/2021/9:09:pm
Washington: Where did coronavirus come from? To find out, the demand for investigation has started rising once again. Meanwhile, Chinese researchers have claimed to...