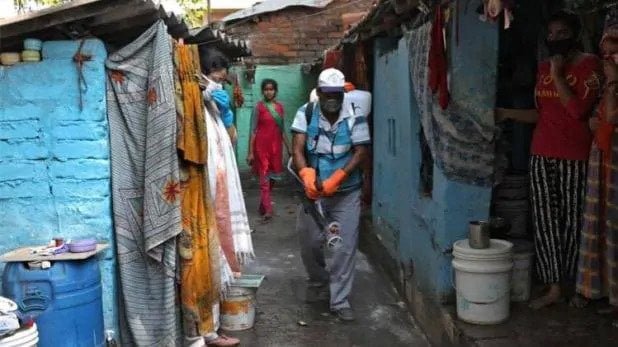 WHO Director-General Tredos Adhanam Gebreyesne said, ‘There are many examples around the world that have shown that no matter how high the outbreak is, it can still be brought under control and some of these examples are Italy, Spain and South Korea, and Even in Dharavi.

Appreciation of Dharavi model
The UN health chief said that people in this slum area of ​​Mumbai are on the verge of victory in the battle of Corona due to testing, tracing, social distancing and immediate treatment of infected patients. The WHO Director General emphasized the need for leadership, community participation and collective solidarity. He said, “From countries where there is rapid development, where restrictions are loosening and now cases are increasing. We need leadership, community participation and collective solidarity. ”

12 new cases occurred
The total number of corona virus infections has increased to 2,359 with 12 new cases of Kovid-19 in Mumbai’s largest slum Dharavi on Friday. This information was given by an official of Brihanmumbai Municipal Corporation (BMC). The civic body has, however, stopped reporting Kovid-19 deaths in the region for the last few days. The official said that 166 patients are currently undergoing treatment in Dharavi and 1,952 patients have been discharged from hospitals so far. Dharavi, Asia’s largest slum, is spread over 2.5 square kilometers where about 6.5 lakh people live in small houses.

What is the Dharavi model, through which the corona was controlled to a great extent?
Dharavi towards liberation from Corona, Chase the virus is the right model: Dighavkar

Even before the first case of Corona came to light in Dharavi on 1 April, we feared that the situation here could worsen. Because 80 percent of people use public toilets. There are 10 to 15 people living in a small house in that area with a population of 8 to 10 lakh. Hence, neither home isolation can be done nor can people follow social distancing.

That is why when things started coming up, we started working under the Chase the Virus. Under this, contract tracing, fever camps, isolating and testing people started. The school, college was made the Quarantine Center. There were good doctors, nurses and 3 times good food. Muslim people were afraid during Ramadan, but they came out on their own, seeing better facilities at the Quarantine Center.

This made our work easier. Institutional quarantined 11 thousand people. We were helped a lot by Sai Hospital, Family Care and Prabhat Nursing Home. The result of all these efforts is that there are only 23 percent active cases here. 77 percent of the people have recovered and gone home.

How many BMC and medical teams were involved in preventing corona in Dharavi?
The major challenge was to curb the corona infection in Dharavi. So we prepared the team after doing all the homework. A total of 2450 BMC people were working here. They ranged from the scavenger to the opener. Similarly, the medical team of 1250 people were on contract. It consisted of 12 to 13 doctors. Everyone played a key role in defeating Corona here, working day and night.

Public toilets are a major challenge in Dharavi. How was this problem dealt with?
The biggest challenge for us was public toilets, which number more than 450. Initially, public toilets were sanitized two to three times a day. Sanitization began to be done 5 to 6 times a day until the cases progressed rapidly. Handwash was kept outside the toilet. They were initially stolen. However, it was later arranged. Dettol and Hindustan Unilever Company provided large scale handwashes here. People were divided into soap. NGOs and other organizations helped a lot.

16/10/2020/10:18:pm
New Delhi: The Supreme Court on Friday refused to consider a PIL filed to demand the imposition of President's rule in the state by...

28/01/2022/1:19:pm
Washington: The US has said that Russia's sale of S-400 missile defense systems to India demonstrates Moscow's role in creating instability in the region...

Imran Khan has been removed through floor test, action on his...