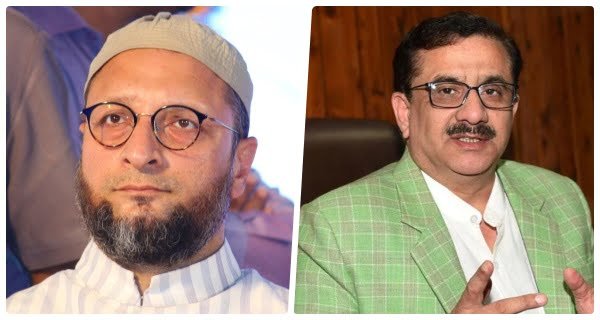 Hyderabad: All India Majlis-e-Ittehadul Muslimeen (AIMIM) chief Asaduddin Owaisi has filed a complaint against Waseem Rizvi, former chairman of the Uttar Pradesh Shia Waqf Board. Owaisi alleges that Rizvi has written objectionable things about Prophet Mohammad in his book ‘Mohammed’. Along with this, he has also expressed hope of arrest of the former chairman of the Waqf Board. The AIMIM chief has submitted a letter in this regard to Hyderabad Police Commissioner Anjani Kumar.

During a conversation with reporters on Wednesday, Owaisi said, ‘We have met the Hyderabad Police Commissioner. Former UP Shia Waqf Board Chairman Waseem Rizvi has written a book, in which objectionable statements have been made about Prophet Mohammad. We have requested to register a case against them. The commissioner has assured to register a criminal case. We hope that he will be arrested soon.

According to the agency, Rizvi is accused of writing objectionable things in his book. Owaisi said in the complaint, “The book written in Hindi has used objectionable language against Islam and its followers.”

“The contents of the book and the objectionable statements have been written with a view to hurt the religious sentiments of those who are followers of Prophet Muhammad and follow the principles of Islam,” he said.

There was a lot of controversy due to Rizvi’s book, which was released this month titled ‘Mohammed’. The book was opposed in some parts of the country. Even before this, Rizvi had prepared a film named ‘Ram Janmabhoomi’ in November 2018. Apart from this, he has also appealed to remove 26 verses of the Quran by filing a petition in the Supreme Court. Controversy arose due to this move of his.

At Pakistani wedding, the woman gave the groom an AK-47 rifle as a gift

Retail sales of jewelry companies are re-evaluating their store model

17/07/2020/12:34:am
Mumbai: Retail sales of jewelry companies are re-evaluating their store model and adopting a digital strategy to increase sales. This information is given in...