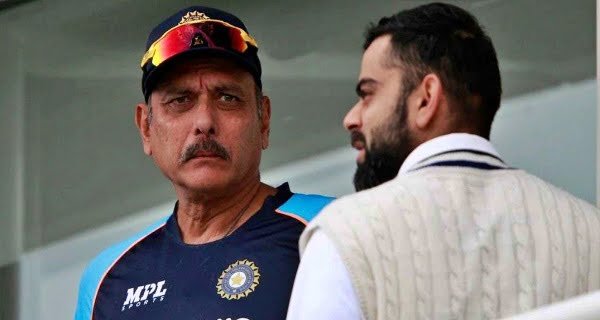 Many things are now coming to the fore about Team India’s handsome captain Virat Kohli’s announcement to leave the captaincy of the T20 team after ‘ICC T20 WORLD CUP Tournament, 2021’. Many surprising things are being revealed. Now the latest news is that it was Ravi Shastri, the head coach of Team India, who advised Virat Kohli to leave the captaincy of India’s T20 and ODI team.

However, he did not heed advice from coach Ravi Shastri. Ravi Shastri believed that Virat Kohli, who was counted among the best batsmen in the world, should pay more attention to his batting. It is worth noting that for about 5 years from today, that is, from 2017, Virat Kohli is handling his responsibilities as the regular captain of all three formats of cricket, T20, ODI, and Test team. After leaving the captaincy of Mahendra Singh Dhoni, popularly known as ‘Captain Cool’, Virat Kohli started taking charge of the Indian cricket team.

According to reports, the discussion about taking or changing the captaincy of Virat Kohli started when Team India won some of the best and toughest in the absence of Kohli. Significantly, Virat Kohli was not there in three of the four-Test matches in India’s tour of Australia. In his presence, India lost the first Test match against Australia badly. But, after that Virat returned to India on paternity leave.

However, the news is also that Virat Kohli does not want to leave the command of the Indian ODI team right now, but wants to captain it. This is the reason why he decided to step down as the captain of the T20 team. However, the team management is also looking into the fact that since Virat Kohli is a fine and explosive batsman, it would be a good idea to give him special attention as a batsman for the loud noises and looks of his bat. And, their responsibilities can be worked out.

At the same time, there is also the truth that it has been more than two years from his bat that he did not get a great century. For this reason, also Virat Kohli has come under the scanner. However, now that Virat has announced to quit the captaincy of the Indian T team and the Royal Challengers Bengaluru RCB team in the IPL after ‘ICC T20 WORLD CUP TOURNAMENT, 2021’, the Indian cricket team’s coach feels as if his He fell behind and it has been that Virat did not heed the advice of leaving the captaincy of his ODI team.

In such circumstances, it cannot be denied that the coming days can be full of difficulties and challenges for Virat Kohli. If Kohli wants to maintain his reign, then he will have to show the heat of his bat with big wins.