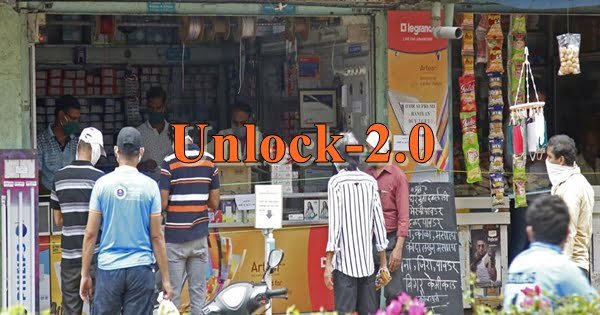 New Delhi: The Union Ministry of Home Affairs has released the guidelines for Unlock-2.0 (Unlock-2.0). In the Unlock 2.0 guidelines, the government said that strictness will still remain in the Containment Zones. The Home Ministry said that all schools and colleges will remain closed till 31 July. Online and distance education will be allowed. The government said that online education will be encouraged. Apart from this, international flights, metro service will be banned till July 31.

Let us know that the duration of Unlock-1 (Unlock-1) is ending on 30th June. With this, the Central Government has announced Unlock-2. In which many activities are also exempted with restrictions. Strictness will remain in the Containment Zone, while exemptions will be given in areas outside the Containment Zone. The government has made it mandatory to wear masks in public places, workplaces and during transportation to prevent the growing infection of Corona. Know what the new guidelines will ban

These things will be banned till 31 July

Lockdown in Containment Zone will continue till 31 July
Containment zone will be determined keeping in mind the guidelines of the District Administration, Ministry of Health and Family Welfare. The purpose of which will be to break the link of infection effectively. Information about these containment zones will be given on the website of the concerned district collector and state or union territory and this information will be shared with the Ministry of Health and Family Welfare.
Only essential works will be allowed in the Containment Zone. Stringent steps will be taken to prevent movement of people inside and outside the Containment Zone. Only medical emergency cases and supplies of essential goods will be approved.

Buffer zones will be created in addition to the Containment Zone
Instructions have been given by the government that intensive contact tracing, door-to-door investigation and other medical precautions will be taken as per requirement in the container zone. In this regard, all the guidelines issued by the Ministry of Health and Family Welfare will be implemented in an effective manner. All the activities in the Containment Zone will be closely monitored by the States and Union Territories and the rules will be strictly followed in the steps related to Containment. In addition to the Containment Zone, the States and Union Territories will also have to decide the buffer zone, where cases can come up. Those rules will be implemented through the district administration in the buffer zone, which will be considered necessary.

31/01/2022/6:24:pm
New Delhi: The ban on rallies for the upcoming assembly elections has been extended till February 11. This important decision was taken in the...

From Drishyam 2 to Dev DD, several web series will be...