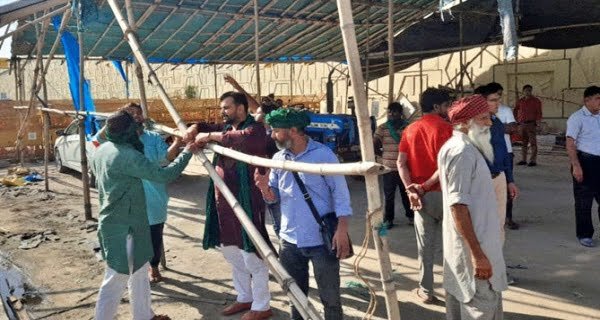 New Delhi: The Supreme Court has taken a tough stand on farmers’ organizations agitating against agriculture laws by blocking roads. The court had issued notices to all the agitating farmer organizations and ordered them to clear the roads. In view of this stand of the court, the agitating farmers have continued to clear the roads. On Thursday, the tents under the flyover at the UP Gate of Delhi-Ghaziabad have been removed.

We have not, the police have closed the roads
At the same time, Rakesh Tikait, spokesperson of the Bharatiya Kisan Union said, “It is not the farmers, but the Delhi Police has blocked the roads by putting up barriers. Vehicles are coming till the barricading. Remove Delhi Police barricading. Tikait said the United Kisan Front will decide whether the farmers will go to Delhi when the road opens.

Will give way but the movement will continue
Tikait said, “As long as our agitation continues, the government will not withdraw all the three agricultural laws. At the same time, we are removing our tents from the roads, but the agitation is continuing. We will give way to the people but the protest will also continue.”

It is to be known that the Supreme Court had issued a notice to the farmers’ agitation organizations going on the borders of Delhi for the last 11 months and ordered them to go off the road. The top court made it clear that protests cannot be held by blocking roads. The country’s highest court has said in its decision that farmers have the right to protest but roads cannot be closed indefinitely.

Palestine canceled vaccine deal with Israel, doses were due to expire

19/06/2021/10:48:am
Jerusalem: The Palestine Authority (PA) canceled the agreement under which Israel said on Friday that it would provide about one million doses of the...

30/06/2020/9:51:am
Beijing: The Government of India has banned 59 apps from China on Monday amid tensions following the violent skirmish between India-China troops in the...

Alibaba owner Jack Ma reappeared after many months, why has he disappeared?

13/10/2021/1:11:pm
Beijing: Chinese billionaire and Alibaba founder Jack Ma, once the world's richest person, has been missing for the past several months. But finally, he...

21/01/2021/10:16:am
Washington: US President Joe Biden on Wednesday took the oath of office as President, promising to improve relations with US partners and increase partnership...