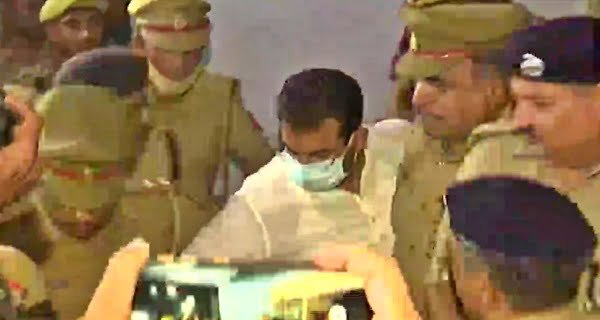 Will be presented in court
DIG Upendra Agrawal said, “Ashish Mishra, son of Minister of State for Home Ajay Mishra Teni, has been arrested for not cooperating during interrogation and not answering certain questions. Will be produced in court.”

Ashish Mishra arrived ahead of time
It is noteworthy that Ashish Mishra had reached the Crime Branch office on Saturday morning before the scheduled time. He was to appear at 11 am but he reached only at 10.38 am. During this, two lawyers Awadhesh Singh and Awadhesh Dubey were also present in the crime branch office with him.

What is the charge against Ashish Mishra?
In the FIR lodged on Monday by Jagjit Singh, a resident of Bahraich district at Tikunia police station in Lakhimpur Kheri district, Ashish Mishra alias Monu, son of the Minister of State for Home, along with 15-20 unidentified people, was accused of jeering and shooting at farmers. has been installed. On Monday, on Jagjit Singh’s Tahrir, in Tikunia police station, against Ashish Mishra alias Monu and 15-20 unidentified people, sections 147 (nuisance), 148 (Use of a deadly weapon), 149 (mob violence), 279 (public place) of the Indian Penal Code. Causing danger to human life by means of the vehicle), 338 (causing danger to the life of others), 304A (causing death by the careless act), 302 (murder), and 120B (conspiracy) Has been recorded.

What’s the matter?
Significantly, on October 3, in the village of Union Minister Ajay Kumar Mishra Teni, the state government had organized several inauguration and foundation-laying programs. Where the Deputy Chief Minister of the state Keshav Prasad Maurya was about to reach. For this, the farmers were opposing him since morning. Seeing the performance of the farmers, Keshav Prasad reached the program through another route. At the same time, the workers of BJP MP were going by three vehicles at Tikoniya village on the old fixed route. During this, the vehicles hit the farmers walking on foot. In which four farmers were killed, and many were injured. After this incident, the crowd present there attacked the vehicles. In this clash, three BJP workers including a journalist were beaten to death by the mob.

The farmers’ organization has accused Ashish Mishra, son of Union Minister Ajay Mishra Teni, of being crushed to death by a car. On the other hand, Minister and MP Mishra has denied this and claimed to have killed BJP workers by first attacking the agitation workers.

Sovereign Gold Bond will open for subscription from tomorrow, know the price of 10...

Third wave of viral infection could strike the country in the next six to...

19/06/2021/8:56:pm
New Delhi: AIIMS Director Dr. Randeep Guleria on Saturday warned that if Covid-appropriate behavior is not followed and crowding not prevented, the next wave...

Coffee culture slackens due to work from home, consumption reduced by 25%

12/07/2020/7:12:pm
Washington: Due to Corona, in the world confined by the new arrangement of work from home, going to local cafes and drinking coffee has...