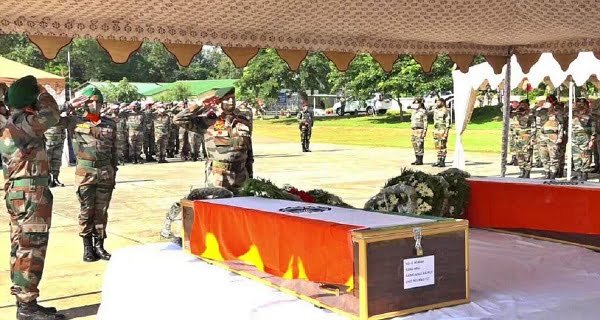 Jammu: Lt Gen YK Joshi, General Officer Commanding-in-Chief, Northern Command, while leading his troops on Wednesday paid tributes to two Major-rank pilots, who had a helicopter crash in the dense forest of Udhampur district. I had died. Officials gave this information.

Major Rohit Kumar and Major Anuj Rajput were on a training flight when their Cheetah helicopter crashed at Shiv Garh Dhar near Patnitop, resulting in serious injuries. Both the pilots died at the command hospital in Udhampur. A Defense Spokesperson said that the General Officer Commanding-in-Chief, Northern Command paid tributes to the brave sons of India who laid down their lives in the line of duty at a function held at Udhampur.

He said, “Major Kumar (35) and Major Rajput (28) were brave officers who made supreme sacrifice in the line of duty. Indian Army will always be indebted to his supreme sacrifice. The Army extends its deepest condolences to their families.” The body of Major Kumar, a resident of Noida, was cremated with full military honors at Devika Ghat in the Udhampur district. He was living with the family in the Udhampur district.

His body, wrapped in the tricolor, was brought to the cremation ground, where a large number of people turned up to bid him a tearful farewell amid slogans of ‘Bharat Mata Ki Jai’ and ‘Martyr Major Amar Rahe’, officials said. He said that during the last rites performed with full military honors, floral tributes were paid to the departed. Apart from this, a gun salute was also given. Officials said the body of an unmarried Major Rajput would be taken to his hometown of Panchkula.

Alert- Before October 31, complete these important tasks including ITR file

06/10/2020/11:39:pm
New Delhi: Festival Sale can be banned from e-commerce companies like Amazon and Flipkart. In fact, the Competition Commission of India (CCI) has approached...

26 Naxalites killed in police encounter in Gadchiroli, the operation lasted for 12 hours,...