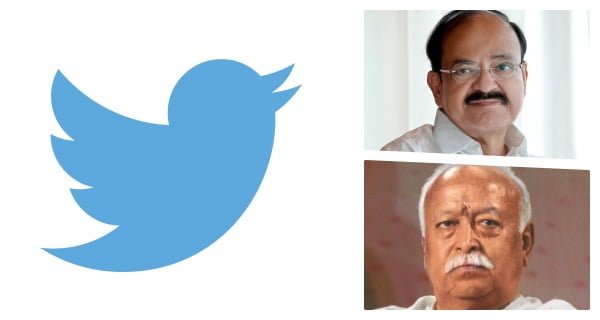 New Delhi: Microblogging app Twitter has re-verified the Twitter accounts of all RSS leaders, including RSS chief Mohan Bhagwat. Twitter has put back the blue tick badge on everyone’s account after the central government expressed its displeasure. Earlier, the account of Vice President Venkaiah Naidu has also been verified.

It is to be known that, on Saturday morning, Twitter had un-verified the personal accounts of Arun Kumar, Bhaiyaji Joshi, Krishna Gopal, Suresh Soni, including Mohan Bhagwat. That is, the blue tick was removed from his page. The central government had expressed strong displeasure over this attitude of the social app.

Increased number of followers
Mohan Bhagwat and Venkaiah Naidu have gained a lot in this controversy of removing and reinserting blue ticks. There has been a huge increase in the number of people following both the leaders. After RSS Chief Mohan Bhagwat removed the blue badge, it had 207.9k followers, while it increased to 215.8k by the time the blue tick came back. Just like it happened with Vice President Naidu, where he had 1.2 million followers, he has now increased to 1.3 million.

was removed citing new rules
Twitter has clarified the controversy after removing the blue tick, saying that due to its new policy, the blue tick was removed. According to the new rule, the account of the account which is not active for the last six months is being unverified. Because in this period he has not done any activity with the account.

27/05/2021/9:22:pm
There are many animals around the world whose species have become completely extinct and some animals are on the verge of extinction. The only...

Sanjay Dutt celebrates Diwali with family in Dubai, said: There is nothing better than...

15/11/2020/8:31:pm
Mumbai: Bollywood actor Sanjay Dutt celebrated Diwali with his family. He has shared a picture with his wife and children on social media on...

Britain will be free from Corona by August! Major claim of vaccine task force...

08/05/2021/11:35:pm
London: Good news can come from Britain soon about the elimination of Coronavirus. Experts have claimed that by August any new virus will stop...

Water leak at Fukushima nuclear plant after earthquake in Japan, fear of damage

20/02/2021/11:04:am
Tokyo: In Japan, after the powerful Earthquake last week, two reactors at the Fukushima Nuclear Plant have indicated a possible loss of cooling water...