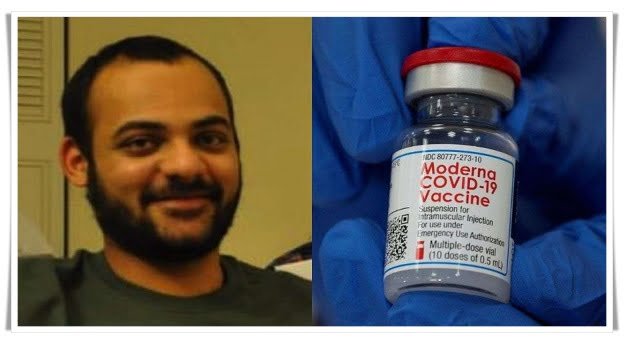 New Delhi: Pharmaceutical companies are making vaccines to protect against Coronavirus around the world. These also include Moderna Company. The vaccine made by him (Moderna Vaccine) is also being administered to the patients. Meanwhile, information has come to the fore that a scientist of Indian origin also has an important contribution in making this vaccine. His name is Mihir Metkar. In its application for a patent for a coronavirus vaccine using RNA technology, the company named Mihir Metkar, a Pune-based bioinformatician, as the ‘First Named Inventor’. The ‘First Named Inventor’ is known as the primary contributor.

Mihir Metkar has also been named in two other applications filed by Moderna to the US Patent Office. Moderna’s corona vaccine is a novel method that uses messenger RNA (mRNA). This messenger RNA prompts the body to make proteins similar to those of the Covid-19 virus so that the body’s immune system can improve and antibodies can be made to fight the coronavirus. Conventional vaccines use either dead viruses or parts of them or a modified form of the gene of a different virus.

Mihir Metkar’s name as ‘First Named Inventor’ is in a document filed by Moderna against the US government’s National Institutes of Health (NIH) claim that it has named its scientists as vaccine inventors. Credit should also be given. Which was developed in collaboration with and provided an amount of $ 1.53 billion to immediately produce the vaccine under the campaign by the administration of former President Donald Trump.

Vladimir Presnyak and Guillaume Stewart-Jones are named after him in the original application for the patent. Matkar has done his Masters from the Institute of Bioinformatics and Biotechnology, Savitribai Phule Pune University. According to his LinkedIn profile, he worked as a project assistant at the Indian Institute of Science Education and Research (IISER) in Pune before moving to the US.

The profile informs that he did his Ph.D. from the RNA Therapeutics Institute of Massachusetts Medical School in Worcester and worked as a post-doctoral fellow before joining Moderna in 2018.

In a separate patent application, Moderna Company has also named Sunny Himanshu as one of the two inventors of the beta coronavirus vaccine. He is MBBS. According to the Centers for Disease Control, Moderna’s vaccine is one of the two main vaccines in the US, and about 164 million doses have been given in the US so far. Apart from this, millions of people in Europe and elsewhere have been given the modern vaccine.

24/05/2021/10:26:pm
Islamabad: The Pakistani Air Force (PAF) has agreed to cooperate with an infamous Turkish paramilitary group accused by the United Nations of deploying combatants...

10 killed after building collapsed in Bhiwandi near Mumbai

21/09/2020/10:25:am
Mumbai: At least 10 people have died after a three-storey building collapsed in Bhiwandi near Mumbai early today. According to preliminary information, five people have...

HC seeks response from Center and RBI regarding this petition, Facebook, Google, and Amazon...