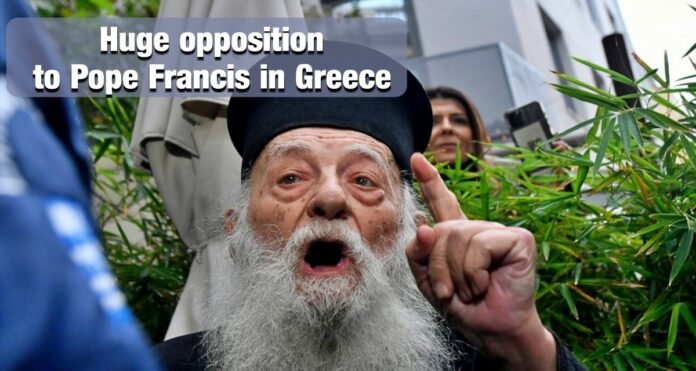 Athens: Pope Francis, who visited Greece, faced heavy protests on Saturday. An elderly pastor opposed him when he had arrived to meet the head of the country’s Orthodox Church. The priest who raised slogans against the Pope belonged to the Orthodox Church of the Christian community. When the Pope was getting out of his car outside the residence of Archbishop Ironimos in Athens, the Greek capital, the priest started shouting slogans against him. The elderly priest shouted, ‘Pope, you are a heretic!’

Soon after, the policemen present there removed the elderly priest from there. Pope Francis probably did not pay attention to this and headed straight to the designated place for a personal meeting with the head of the Orthodox Church. Let us tell you that earlier there was a protest on the island of Cyprus as well. During Francis’ visit, the leaders of the two churches discussed the promise to overcome centuries of mistrust and competition for influence. Ironimos welcomed Francis ‘with a sense of honor and fraternity’. After 20 years, Francis has gone on a state visit to Greece.

It is necessary to protect the environment
Pope Francis warned on Saturday that populist promises and “easy answers” to authoritarianism threaten democracy in Europe and called for a renewed dedication to promoting the common good. Addressing political and cultural leaders in Greece, the birthplace of democracy, the Pope said only strong multilateralism can successfully solve issues ranging from protecting the environment to epidemics and poverty.

“It is needed to put common needs ahead of personal interests in politics,” he said after arriving in Athens on Saturday. Then we cannot ignore how today and not only in Europe but elsewhere we are witnessing a retreat from democracy.

Travelers from 60 low-risk countries will no longer have to isolate in the UK...

04/07/2020/10:37:am
London: The UK announced on Friday that it will offer non-segregated international travel to people coming from around 60 countries with a low risk...

Thousands of people came on streets against Putin in Russia, demand for resignation intensified

13/07/2020/4:53:pm
Moscow: The anger of the people against President Vladimir Putin is increasing in the remote areas of Russia. Thousands of local people have taken...

A bomb blast in Bamiyan, Afghanistan, has killed at least 14 people

25/11/2020/10:49:am
Kabul: A roadside bomb blast in Afghanistan's Bamiyan province on Tuesday killed at least 14 people, including a traffic policeman, and injured 45 others....