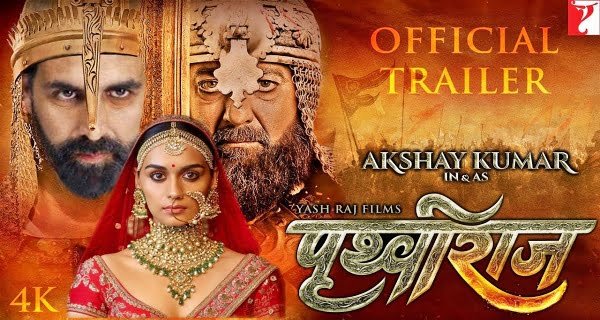 Mumbai: Akshay Kumar is in news these days for his film “Prithviraj”. The film is based on the life and valor of the fearless and mighty emperor Prithviraj Chauhan. In this film, the superstar is playing the role of the great warrior who bravely faced the ruthless invader Muhammad Ghori. In such a situation, Akshay has now saluted the bravery and courage of this great warrior by releasing a poster and teaser link of the film on social media.

Talking about the poster, Akshay Kumar is seen in Maharaja’s dress. At the same time, Manushi Chillar has become a queen. Also, talking about the teaser, there is a 1-minute 22-second teaser. In the teaser, an army of lakhs of people is seen fighting. Arrows are seen flying in the air. In this teaser, Akshay is seen roaring like a lion.

Says Akshay, “Prithviraj’s teaser is the soul of the film. The essence of the life of the great warrior emperor Prithviraj Chauhan is that there was no word of fear in his life. This film is our tribute to his valor and life. The more I read about him, the more I was amazed at how he lived and breathed every moment of his glorious life for his country and values. ,

Says the superstar, “He is a legend, he is one of the bravest warriors and most honest kings that our country has seen. We hope that Indians across the world will like our salute to this mighty emperor. We have tried to present the story of his life in the most authentic way possible and this film is our tribute to his unmatched bravery and courage.”

The beautiful Manushi plays the role of Sanyogita, the girlfriend of Prithviraj Chauhan. This is Manushi’s debut film and one of the most awaited debuts of 2022. Produced by Yash Raj Films, Prithviraj is directed by Dr. Chandraprakash Dwivedi, who directed the biggest television epic drama “Chanakya”. This epic drama was based on the life of India’s most influential political strategist, Chanakya.

Big cyber attack in US for a month, Tech company accuses Russia

24/02/2021/8:27:pm
Washington: The world's largest technology companies say that a month-long cyber intrusion in government and corporate networks was so complex, focused, and laborious that...

11/04/2021/9:10:pm
Panama City: Storms hit the southern states of America early Saturday, killing at least one person in the state of Louisiana, and falling down...

01/04/2021/10:39:am
Jabalpur / Bandhavgarh: A fire broke out in Bandhavgarh National Tiger Reserve, a stronghold of tigers in Madhya Pradesh, which took a rare form...