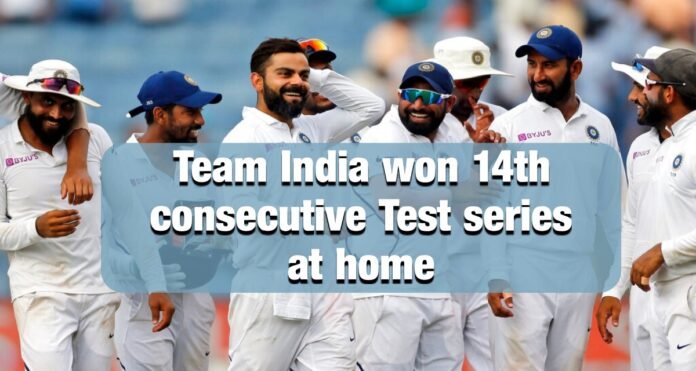 New Delhi: India won the two-match series 1-0 (India vs New Zealand) by defeating New Zealand by 372 runs on the fourth day of the second and final Test cricket match here on Monday. Chasing a difficult target of 540 runs, New Zealand’s team got out for 167 runs in their second innings. India had scored 325 runs in their first innings, in response to which New Zealand’s team was reduced to 62 runs. India declared their second innings at 276 for seven. The first test match played between the two teams in Kanpur ended in a draw. This is the 14th consecutive Test series victory of the Indian cricket team at home. At the same time, this is also India’s biggest win in Test cricket. Earlier it was 337 runs, which came against South Africa in 2015.

Team India won within an hour of the start of the fourth day’s play
Just 43 minutes after the start of the day’s play, India, chasing a difficult target of 540 runs, dismissed the New Zealand team for 167 runs in 56.3 overs. Ravichandran Ashwin (4 for 34) ended New Zealand’s innings with Henry Nicholls catching Wriddhiman Saha for his 300th Test wicket in India. New Zealand’s team, which drew the first Test match by showing their spirit in Kanpur, could not struggle in Mumbai. His batsmen easily succumbed to the extra bounce and turn. However, New Zealand will remember this match for the historic feat of 10 wickets in the innings of Aijaz Patel.

India showed aggressive batting
Earlier, India batted in an aggressive manner. In his second innings, openers Mayank Agarwal (62 off 108 balls), Cheteshwar Pujara (47 off 97 balls), Shubman Gill (47 off 75 balls), Axar Patel (41 not out off 26 balls), and skipper Virat Kohli (84 off 84 balls) played a crucial role in his side. 36 off balls) made a useful contribution. For New Zealand, spinner Aijaz Patel, who took all 10 wickets for 119 runs in the first innings, took four for 106 in the second innings while Rachin Ravindra took three for 56. Patel took 14 wickets giving 225 runs in this match. This is the best performance by a bowler against India.

Except for Wriddhiman Saha, all the batsmen hit sixes
Despite Ajaz Patel’s 10-wicket haul, the confidence of the New Zealand bowlers was shaken. In 70 overs from India, 25 fours and 11 sixes were hit. Alam was that every Indian batsman except Wriddhiman Saha (13) hit a six. Akshar Patel alone hit three fours and four sixes in his stormy innings. Shreyas Iyer hit two sixes in his innings of 14 runs in eight balls.

Shubman Gill did not start in the second innings
Shubman Gill and Virat Kohli, who did not open the innings on Saturday due to injury, added 82 runs for the third wicket. Barring the six on Will Somerville of the Indian captain, he did not look comfortable during his innings. He finally played Ravindra’s ball on his own wickets. However, contrary to his defensive style, Pujara went ahead with the ball taking flight twice, and hit fours in the midwicket area. However, he could not complete the half-century. Patel’s full-length ball was caught in the safe hands of Ross Taylor in the slip but the edge of his bat.

17/08/2021/9:11:pm
Kabul: Afghanistan's Vice President Amrullah Saleh has declared himself the Patron President. Saleh has tweeted that he is gathering support for himself. Saleh tweeted...

Windows 11 now for Indian users, learn how to download and install on your...

05/10/2021/9:44:pm
Microsoft has started rolling out Windows 11 in India. The latest software is being made available on Windows 10 PCs through a free upgrade...

Accidents in many cities of Mumbai and UP during Ganesh Visarjan, 10 people...

Now you can charge your phone with just voice! Xiaomi is bringing new technology

21/06/2021/2:43:pm
Technology company Xiaomi is currently working on new technology, in which the smartphone can be charged only with the help of voice. Xiaomi claims...