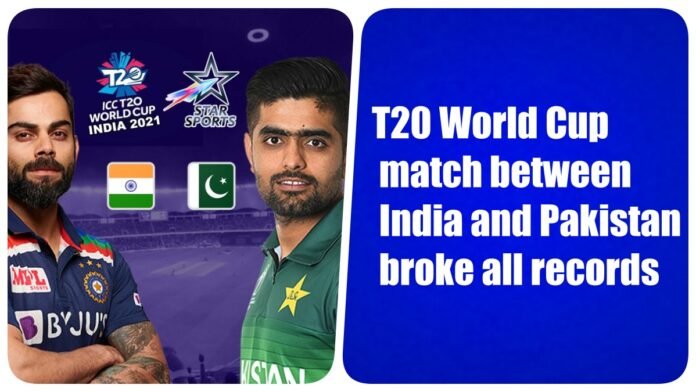 New Delhi: Be it a cricket match between India and Pakistan on any ground, the thrill is at its peak. A hallmark of this was seen during the T20 World Cup played in the UAE. Tickets for this match were sold out on sight. The special thing is that neither the match was in India, nor in Pakistan, but on the basis of viewership, this match has made a record. Now the International Cricket Council (ICC) has informed that it has become the most-watched match in T20 International history.

According to the ICC, the T20 World Cup has been the biggest cricket tournament ever to be held in the UAE and Oman. This event broke the record of viewership in many regions. This includes a record television reach of 167 million. Not only this, the Star India network includes a record consumption of 15.9 billion minutes in India which was recorded during the much-awaited India-Pakistan match. This match is now the most-watched match in T20 International history. Earlier in the year 2016 in this ICC event played in India, the India-West Indies semi-final match was on top of the list.

India had to face a crushing defeat in that match, which was the first match of this season of Team India’s T20 World Cup. India could not even reach the semi-finals of this T20 tournament. It was also defeated by New Zealand after losing to Pakistan. His dream was shattered by two consecutive defeats. Although the team under the captaincy of Virat Kohli again won 3 matches in a row, in the semi-finals, only Pakistan and New Zealand made it from their group.

Despite India’s early exit from the tournament, the total TV viewership consumption for the entire tournament in the country was recorded at 112 billion minutes. The audience share among the young audience (children under 15) in India was 18.5 percent thanks to a highly successful marketing campaign ‘Live the Game’. The digital consumption for the tournament saw tremendous growth on Disney+ Hotstar in India. In the UK, viewership for India vs Pakistan match on Sky UK increased by 60 percent, while overall viewership for the market increased by 7 percent.

Videos made from the ICC’s partnership with Facebook also saw a significant increase. A total of 4.3 billion views were recorded for the tournament across all channels. Last year, 3.6 billion views were recorded during the ODI World Cup. The ICC also garnered 618 million views on its social media channels, a 28 percent jump since the 2019 season of the ICC Men’s One Day Cricket World Cup. ICC CEO Geoff Allardyce said, “We are extremely pleased with these outstanding global viewership numbers, which demonstrate the power of T20 International cricket to driving viewership across TV and digital platforms.”

13/04/2021/9:48:pm
Washington: The US administration led by President Joe Biden in the latest submission before a court of the country, Canadian businessman of Pakistani origin....

06/01/2021/10:56:am
New Delhi: Industrialist Gautam Adani's company Adani Wilmar has made it clear that Saurav Ganguly, the chairman of BCCI and the former captain of...

20/08/2020/9:17:pm
Moscow: Russia's opposition politician Alexei Navalny has gone into a coma after drinking a cup of tea, with his spokesman saying he believes he...