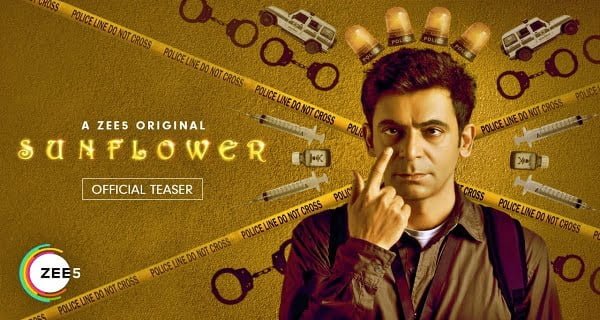 New Delhi: The trailer of the web series ‘Sunflower’ has been released. Famous comedian Sunil Grover is playing an important role in the series. The actor has shared the trailer of the show with his social media account. Apart from Sunil, many prominent faces of the film industry are seen in the trailer. The show has been joined by well-known artists like Ashish Vidyarthi, Ranveer Shorey, and Sonali Nagrani. Sunil Grover has played the role of a salesman named Sonu. He is seen speaking the dialogues in his familiar style.

The trailer of the show makes it feel like a suspense film. The story is woven around the character of Sunil Grover, who is a suspect in a case. Ranveer Shorey has played the role of a policeman, who is trying to solve the mystery of a murder. This series created by Vikas Bahl will be streamed on OTT platform ‘G5’ (ZEE5) on 11 June.

Sharing the trailer of the show, Sunil has written, ‘Sunflower’ trailer has been released. Do not think seriously about us. Here we are just dropping the Sunflower’s Explosive Trailer on your timeline. More than 60 thousand likes have come on this post, which was shared about an hour ago. Fans of Sunil Grover are eagerly waiting for this show.

Let us know that Sunil Grover was seen in the web series Tandava earlier. He was seen in this web series along with actors like Saif Ali Khan, Dimple Kapadia, Mohammed Zeeshan Ayub, Anoop Soni, Kumud Mishra. He had been in the limelight due to an altercation with Kapil Sharma. People keep on speculating about his comeback in the ‘Kapil Sharma’ show on the day.

21/03/2021/10:48:am
New Delhi: Due to increasing cases of Coronavirus infection, the heartbeat of the country is once again intensifying. Corona's graph is making new records...

19/08/2020/8:46:pm
New Delhi: Several important decisions were taken in a meeting held at his residence on Thursday under the chairmanship of Prime Minister Narendra Modi....

13/12/2020/6:08:pm
New Delhi: BJP president JP Nadda has been found to be Corona positive today. He gave information about this himself. He tweeted that after...