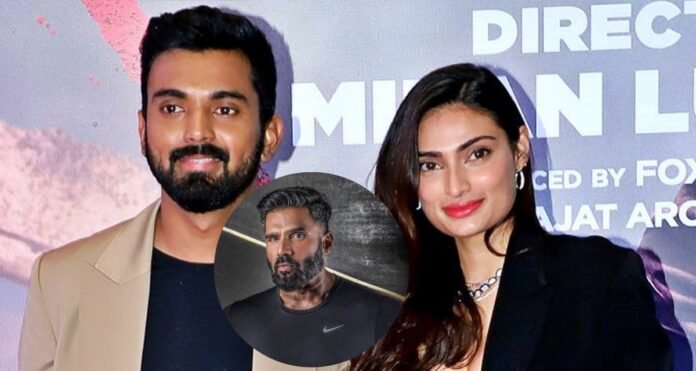 Mumbai: The news of Athiya Shetty and KL Rahul’s relationship has been doing the rounds for some time now. These rumors gained momentum when the actress was spending time with Rahul and other cricketers and their families in the UK. During the premiere night of Ahan Shetty’s debut film Tadap, KL Rahul and Athiya were seen attending the event along with the entire Shetty family. Since that night, the news of their marriage has started coming in. According to some reports, both of them will have a winter wedding this year, but finally, Sunil Shetty has spoken openly about it.

In an interview with ETimes, Suniel Shetty was asked about his daughter’s marriage rumors. Reacting to this, the veteran actor said that Athiya Shetty is his daughter and he wants her to get married sometime. He said that he wants his son to get married too and the sooner the better. He left the choice to his children. Talking about KL Rahul, Sunil revealed that he is in love with the boy. Elaborating on the wedding, he said, “It is for them to decide what they want to do, as times have changed. Both daughter and son are responsible (my daughter and son both are responsible people). I would like them to make a decision.

Meanwhile, Pinkvilla exclusively learned that the wedding preparations for Athiya and KL Rahul have begun and they will tie the knot by the end of this year. It is also being told that this couple will also do a South Indian Wedding Ceremony. As fans are excited about this big fat Indian wedding, an official announcement is yet to be made in this regard.

21/12/2020/11:31:am
Washington: The outgoing US President Donald Trump has filed a new petition in the Supreme Court as part of his efforts to dismiss the...

Live webinar will be held before the board exam, 10th-12th students should join

70s Veteran actress Shashikala Jawalkar passed away at the age of...

Preity Zinta did corona test 20 times, told how life is...