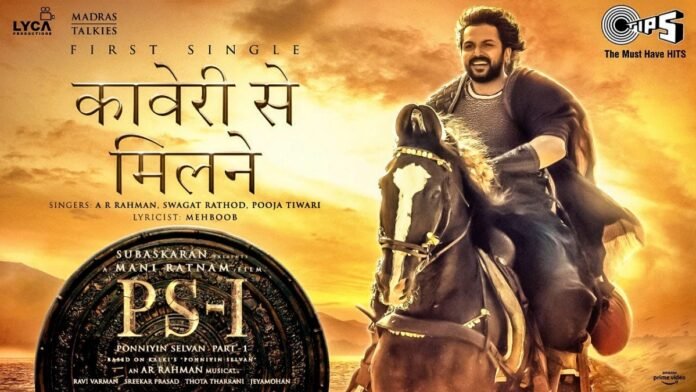 Mumbai: The much-awaited historical film ‘Ponniyin Selvan’ ie PS-1’s worn song ‘Kaveri Se Milen’, directed by Mani Ratnam, was released today on Tips Official’s YouTube channel. Has been done. The song has been sung by AR Rahman, Swagat Rathod, and Pooja Tiwari. Mehboob has written the lyrics of this song. AR Rahman has also composed this song. Released a few minutes ago, this song has been seen by more than 18 thousand people. At the same time, more than three thousand people also liked this song.

It is worth noting that this film will be released in cinemas on 30 September at the Pan India level. Vikram, Aishwarya Rai Bachchan, Jayam Ravi, Karthi, Trisha, Aishwarya Lakshmi, Sobhita Dhulipala, Prabhu, R Sarathkumar, Vikram Prabhu, Jayaram, Prakash Raj, Rahman, and R Parthiban will be seen in their important roles in this film.

Women’s Commission took cognizance of video of vandalism with wife

18/09/2021/10:31:pm
Kabul: Since the control in Afghanistan, running the country is no less than a challenge for the Taliban Nizam. In such a situation, there...

26/10/2020/10:54:am
Yerevan (Armenia): The war for the Nagorno-Karabakh region continued on Sunday, with Armenia and Azerbaijan reiterating their commitment to a peaceful solution to their...

13/08/2020/11:10:am
New Delhi: Union Minister Ramesh Pokhriyal Nishank said that under the new Education Policy (NEP), universities will not be able to recognize more than...