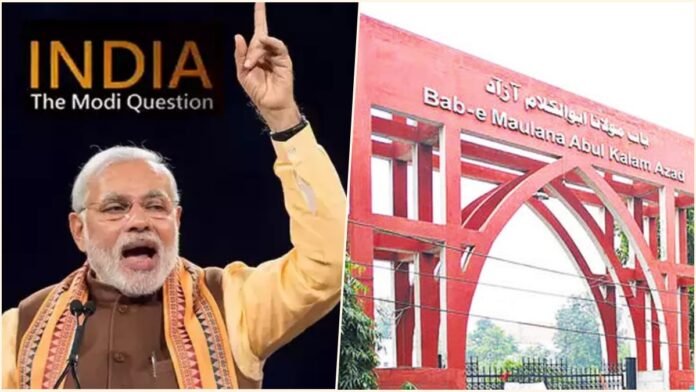 New Delhi: Controversy is increasing across the country regarding the BBC documentary. This controversy can be gauged from the fact that a young leader of Congress tendered his resignation in this dispute. At the same time, Congress is in favor of showing this documentary. Left student organization Student Federation of India had announced the screening of the BBC documentary ‘The Modi Question’ at Delhi’s Jamia Millia Islamia University.

The central government has already banned this documentary. And Congress is in favor of showing it. There was a lot of uproar on campus regarding the screening. The university administration is against it. But the students have shown a lot of enthusiasm about it. The matter is getting serious. After this Delhi Police took 13 students of the Students Federation of India (SFI) into custody.

Explain that on this matter, the university administration says that no film will be allowed on campus without prior permission. Even then, if the issue is not accepted, action will be taken against the organizers. Vice Chancellor Najma Akhtar said that the student organization SFI wants to spoil the atmosphere of the campus. If needed, action will be taken against these students.

The Students’ Federation of India is a student organization in India affiliated with the Communist Party of India. It was established on 30 December 1970. The Left students’ organization at Delhi’s Jamia Millia Islamia University had announced the screening of the BBC documentary ‘The Modi Question’.

US senator expresses concern over Covid-19’s situation in India

23/04/2021/10:16:pm
Washington: Several US lawmakers have expressed concern over the unprecedented increase in Covid-19 cases in India and have requested the Biden administration to provide...

Cold rises in Kashmir, minimum temperature in Pahalgam is minus 4.7 degrees Celsius

16/11/2021/7:07:pm
Srinagar: It was the coldest night of the season here with the minimum temperature recorded at minus 1.2 degrees Celsius in Srinagar. Officials gave...

27/09/2022/10:19:am
New Delhi: The Sample Registration System 2020 report has been released regarding the General Fertility Rate in India. According to this report, a decline...

Now the lockdown in MP’s urban areas will be 60 hours a week, starting...