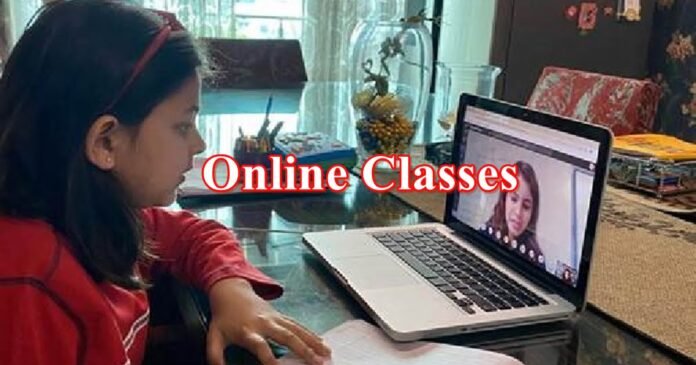 Indore:Due to the lockdown, online classes are being conducted in many schools, in which students are taught for five to six hours. Now no school will be able to take more than three hours of online classes. Classes for primary and middle school students will not take more than two hours. On Saturday, the teachers of Indore Sahodaya Group met monthly through the Zoom app. Principals of 85 schools of the city attended it. In this, the time of online classes of all the schools associated with the group was fixed, so that students do not have to spend much time on computers and mobiles. The group consists of 130 schools. In such a situation, now all these schools will take online classes of students as per schedule.

It was decided in the meeting that there will be one hour screen time for the children from nursery to class II. During this time period, classes of students will be held. Students will also have to give a half-hour break between classes. Similarly, two hours of screen time has been prescribed for students from class III to V. In this, the school will be able to spend four periods as per convenience.

Odd-Even, weekend curfew ends in Delhi, 200 people will be able to attend the...

27/01/2022/2:16:pm
New Delhi: After the decline in the corona case in the capital Delhi, now the general public has got relief from the restrictions. An...

24/01/2023/10:39:pm
Bow down to the most exceptional female warrior to ever live. Viola Davis is #TheWomanKing. Watch her rise exclusively in movie theaters September 16. Visit...

18/09/2021/7:42:pm
Chandigarh: The tenure of Captain Amarinder Singh as the Chief Minister of Punjab has come to an end. He reached Raj Bhavan and submitted...

By defeating west indies, India rises to the top in T20 rankings

Announcement of this PSU, only women officers will be recruited, application...