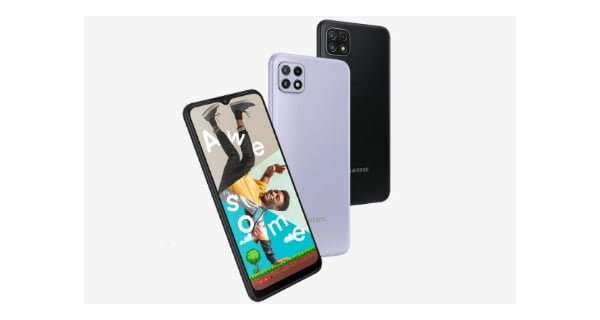 Samsung has launched its latest 5G smartphone, the Samsung Galaxy A22 5G, in India. The smartphone is powered by MediaTek and joins the likes of the Realme 8 5G, the iQoo Z3 (review), and the Poco X3 Pro as competitive smartphones with interesting spec sheets that offer 5G connectivity at under Rs 20,000. While consumer 5G services are yet to roll out in India, most manufacturers are now picking up the pace to include 5G services in their phones. The move is being done to give buyers a level of future-proofing, so as to not compel them to buy a new phone again in about a year, which is when 5G services are expected to roll out in the country.

The Samsung Galaxy A22 5G will be available across all offline and online retailers, including popular stores such as Amazon and Flipkart. It will also be available on Samsung’s own online store. The Galaxy A22 will be offered in two variants both with 128GB storage, and either 6GB or 8GB of RAM. The variants are priced at Rs 19,999 and Rs 21,999 respectively.

Key Specifications
The Samsung Galaxy A22 5G is powered by the MediaTek Dimensity 700 SoC, which is a mid-range chipset in MediaTek’s latest 5G SoC lineup. Along with this, the device features up to 8GB RAM and 128GB storage, the latter being expandable by up to 1TB through microSD cards). Upfront, the Galaxy A22 5G features a 6.6-inch full HD display with a 90Hz refresh rate, and a drop notch to accommodate the front camera.

To the rear, the Galaxy A22 5G features a 48MP main camera, a 5MP ultra-wide camera, and a 2MP macro camera, along with an 8MP camera to the front. It gets a 5,000mAh battery with 15W fast charging and runs on Android 11 with OneUI Core 3.1 custom interface. The smartphone will be available in three color variants grey, mint, and violet, and is rated at the 203-gram weight. Samsung also states that the Galaxy A22 5G will offer Dolby Atmos audio enhancement for both wired and wireless earphones.

The Galaxy A22 5G lines up against the likes of iQoo Z3, Realme 8, and Poco X3 Pro, all of which will be competitive alternatives to the former in a competitive market segment. The device is already available across retailers and is also eligible for banking discounts that range up to Rs 1,500 cashback.

08/11/2020/10:27:am
New Delhi: The number of patients infected with Coronavirus in the country is once again on the rise. With the festival season approaching, the...

There was a ruckus on Priyanka Chopra’s new show The Activist, the actress apologized...

17/09/2021/10:04:am
There is a lot of controversies these days about actress Priyanka Chopra's new show 'The Activist'. In this show of Global Citizen, Priyanka Chopra,...

Airstrikes between Gaza and Israel after tension in Jerusalem

25/04/2021/11:43:am
Jerusalem: Rockets were fired from the Gaza Strip to Israel again on Saturday despite the United Nations' appeal to maintain peace and warn Israeli...

11/07/2020/10:21:am
Only target set in Ravi - 'Chase the target', now Corona is under control hereThe conditions were extremely challenging due to the geographical location...

29/11/2020/12:13:pm
New Delhi: On the proposal and further strategy of the Union Home Minister Amit Shah, the leader of the farmers protesting against the withdrawal...