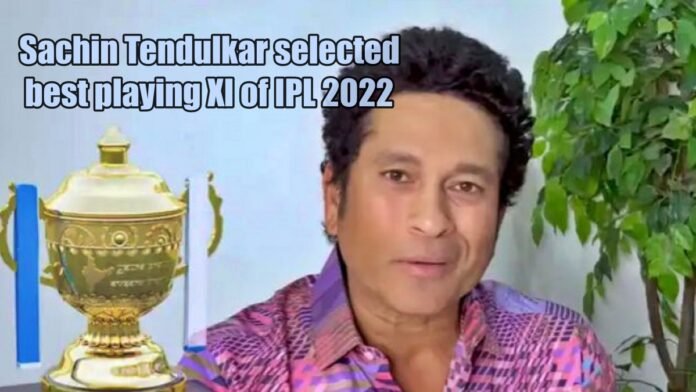 Former India great batsman Sachin Tendulkar has made his Best Playing XI team of IPL 2022. In this selected team, Sachin Tendulkar has given place to the best players of this season. He gave this information on his YouTube channel. His team also includes players from Punjab Kings (PBKS) and Mumbai Indians.

Announcing his best IPL 2022 Playing XI, Sachin said, “I would like to keep the opening batsmen with left arm and right arm combination, in which I have selected Shikhar Dhawan and Jos Butler in my team. I have been hired as an opener. Butler looked in excellent form this season (IPL 2022 Season-15). That’s why no one else can be Shikhar Dhawan’s partner other than him.

The Master Blaster has placed KL Rahul (Captain LSG) at number 3 and Gujarat Titans GT captain Hardik Pandya at number four in his best playing XI. Regarding Hardik, he said that Hardik Pandya has been kept at number 4 because this player won the hearts of everyone by performing well at this place in IPL 2022.

Sachin Tendulkar has given place to David Miller and Liam Livingston at number-5 and number-6 in this special team. The reason for this was that these two players battled for their respective teams on many occasions in IPL 2022 and also won.

06/11/2020/10:15:am
Washington: In the US Presidential Elections, the subject on which voters appeared most and most clearly divided is the Coronavirus epidemic and President Donald...

For Rolling Out 5G,Airtel Deploys One of the World’s Newest Photonic Designs

18/06/2020/8:24:pm
Indore:The Superintendent Engineer, who lodged an FIR in the infamous Honey Trap case of Madhya Pradesh, has been suspended by Indore Municipal Corporation (IMC)...