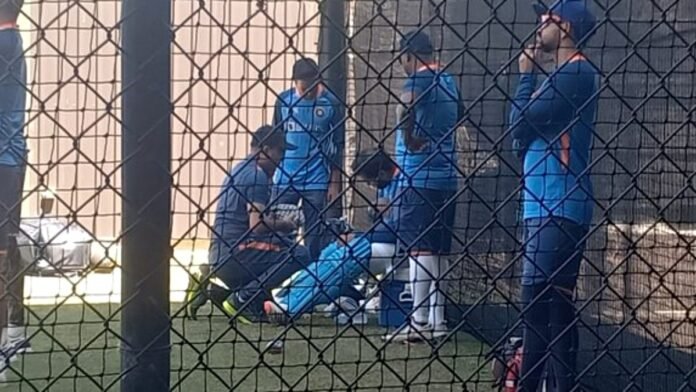 New Delhi: The Indian team suffered a major setback at that time before their semi-final match of the T20 World Cup 2022. When team captain Rohit Sharma got injured during the practice session. According to the report, Rohit got hurt in his right hand while practicing in Adelaide. After this, ice has been applied to his hand. But when Rohit started practicing again, the fans heaved a sigh of relief.

However, Rohit did not practice again after the injury and immediately left the practice session and went with the team physio. But then after a while, he has been seen practicing again on Bates. It is worth noting that if captain Rohit Sharma’s injury was serious, it could have proved to be a big setback for Team India before the semi-final against England. It would have been a disappointing thing for Indian cricket fans too.

Let us tell you that at present, India has to play against England in the semi-finals. This knockout match between these two strong teams will be played in Adelaide on Thursday, 10 November. Let us know that India and England will face each other after 10 years in the T20 World Cup, while both will face each other for the first time in the knockout stage.

It is worth noting that this time the Indian team is playing the T20 World Cup for the first time under the captaincy of Rohit. After leaving the captaincy of Virat last year, veteran Rohit Sharma was given command of the team. The team has performed well under Rohit’s captaincy so far. However, India’s captain Rohit Sharma has not been able to do anything special in this World Cup. He has scored only 89 runs so far. But now that according to the report, Rohit has resumed practicing after the injury. So everyone’s hope is that Rohit will remain a part of the team in the semi-finals.

06/10/2022/10:38:am
Dubai: Hindu temple was inaugurated in the United Arab Emirates (UAE) on the occasion of Dussehra Giving information, it was told that UAE is...

Name of Kareena Kapoor’s son was asked in public school examination, the notice was...

25/12/2021/8:56:pm
Khandwa: There has been an uproar over the question asked in the examination of a private school in Madhya Pradesh. Students were asked the...

Google remained down for a long time around the world

09/08/2022/9:47:am
The world's largest search engine Google was down for a long time on Tuesday. According to the outage tracking website Downdetector.com, Alphabet Inc.'s Google...