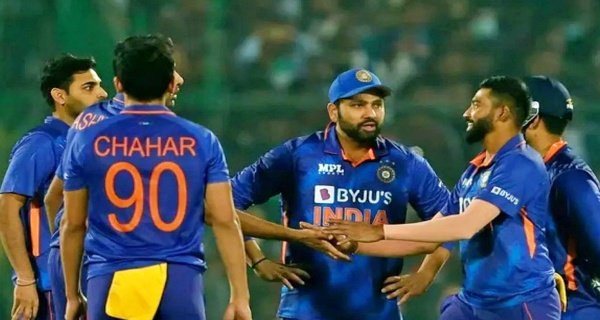 Ranchi: Team India has made a great start under the leadership of Rohit Sharma. The team defeated New Zealand by 7 wickets in the second T20 (India vs New Zealand). With this, the team also captured the series. The team went 2-0 up in the series. Playing first in the match, New Zealand scored 153 runs for 6 wickets. In response, on the basis of half-centuries from both KL Rahul and Rohit, the team achieved the target for 3 wickets in 17.2 overs. India has won the second consecutive bilateral series against New Zealand. The final match of the series will be played on 21 November in Kolkata. After this, a 2-match Test series is also to be played between the two teams.

However, Team India, chasing the target, did not start fast. The team had scored 45 runs without a wicket in the first 6 overs. Team India’s batsmen picked up the pace after 9 overs. KL Rahul was dismissed for 65 runs by Tim Southee. He faced 49 balls. Hit 6 fours and 2 sixes. Rahul and Rohit added 117 runs for the first wicket.

Rohit played a brilliant inning in the second consecutive match
Rohit Sharma scored 48 runs in the first T20 match. He has maintained his form by scoring a half-century in the second match. He completed his half-century by hitting a six. This is his 25th fifty of T20. He has also become the first Indian to hit 450 sixes in international cricket. He has 454 sixes. He scored 55 runs off 36 balls. Hit one four and 5 sixes. Suryakumar Yadav returned to the pavilion after scoring one run. Young batsman Venkatesh Iyer got a chance to play at number-3. He remained unbeaten on 12 while Rishabh Pant remained unbeaten on 12. Pant gave victory to the team by hitting a six off Neesham in the first two balls of the 18th over. Saudi got all the three wickets of India.

40 lakh youth got vaccinated on the first day, MP topped, UP-Delhi behind