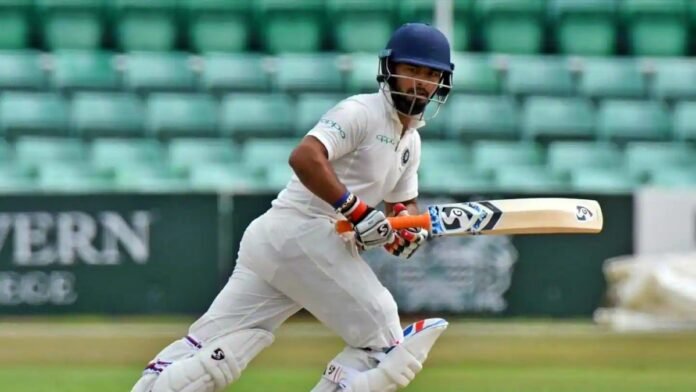 Birmingham: Rishabh Pant’s attacking century and a 222-run stand with Ravindra Jadeja helped India recover from early setbacks on the rain-hit first day of the fifth Test against England at 338 for seven. India’s score at one point was 98 for five, after which Pant and Jadeja added 222 runs in 239 balls. Pant scored 146 runs in 111 balls with the help of 20 fours and four sixes while Jadeja was playing 83 runs in 163 balls. Only 73 overs could be bowled on the first day due to rain.

Pant, who recently faced criticism for his poor form in limited-overs cricket, once again played a memorable inning in Test cricket, scoring his fifth career century and fourth overseas. He completed his century in just 89 balls which is the fastest Test century by an Indian wicketkeeper. England captain Ben Stokes handed the task of curbing Pant’s bat to left-arm spinner Jack Leach who failed miserably.

Leach conceded 71 runs in nine overs. Pant hit two fours and two sixes in his last over. Joe Root finally sent Pant to the pavilion. The second session was delayed by an hour due to rain. England had removed India’s five wickets for 98 runs. While James Anderson dominated the morning, Matthew Potts took the precious wicket of in-form Virat Kohli (11). He also sent Hanuma Vihari (20) to the pavilion. Vihari was dismissed leg before by POTUS.

In the next over, he sent Kohli to the pavilion. Shreyas Iyer, playing his first Test outside India, got off to an aggressive start by hitting Potts for three fours but was dismissed for 15 off 11 balls. Anderson bowled him a short ball and Sam Billings took his catch with one hand by putting a great dive. After this, Pant and Jadeja continued the innings by playing boldly and carefully. Seeing their attitude, England captain Ben Stokes handed the ball to left-arm spinner Jack Leach, who was greeted by Pant with two fours and a six.

He completed his half-century by hitting Leach for a four-in deep square leg. Earlier, England captain Ben Stokes won the toss and elected to bowl. Their most successful fast bowler James Anderson created pressure in the rain-hit morning session as the visitors lost two wickets for 53 runs by lunch. Lunch break had to be taken 20 minutes earlier due to rain.

Anderson gave England a breakthrough with openers Shubman Gill (17 off 24 balls) and Cheteshwar Pujara (13 off 46 balls) being caught at second slip by Jacques Crowley. If Crowley had caught Vihari off Matthew Potts, India would have got three wickets. The Indian team, which returned to play the last match of the series, has played only one four-day warm-up match before this. England, on the other hand, made a ‘clean sweep’ against world Test champions New Zealand. Facing the conditions in England was a tough challenge for the Indian openers.

Anderson and Stuart Broad did not allow him to play freely. Gill starts off with a boundary off Anderson at mid-wicket. After this also made a straight drive but lost his wicket after playing a bad shot. He batted on Anderson’s delivery outside off-stump and was caught at second slip. Five overs later, Anderson dismissed Pujara for the 12th time in his career. Pujara, who returned to the Indian team after scoring runs in county cricket, also fell victim to the ball falling on the off-stump.

Gideon became the second Indian-American to win the primary

15/07/2020/8:39:pm
Washington: Indian-American politician Sarah Gideon won the Democratic Party primary for the US Senate seat from the state of Maine. She will now contest...

Now service charges will be levied on eating food in restaurants and hotels: Delhi...