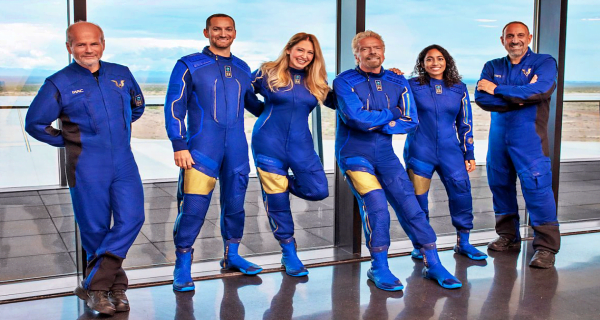 New Mexico: Richard Branson, the British billionaire who turned dreams into reality and the owner of American spacecraft company Virgin Galactic, will go on a journey to space today. Branson announced this historic visit about 10 days ago. Along with Branson, six people will be part of this flight, including Indian-origin Sirisha Bandla. Sirisha Bandla will be the second Indian-born woman to travel to space. Earlier, Kalpana Chawla had done this wonder.

This spacecraft will take off from New Mexico today, in which all the crew members will be employees of the company. This will be the fourth flight for Virgin Galactic to space. Let us tell you that a few days ago, Amazon founder Jeff Bezos announced to go to space. He would have been the first to do so, but Richard Branson stopped him from making history. A few hours later, on July 11, he announced to go to space.

What is the purpose of space travel?
The purpose of this visit of Richard Branson is to restart space tourism. Let us tell you that for many years some companies are trying to come in this field. Earlier the Russian Space Agency used to organize such an event. For this huge amount was taken from the people. Under this, people were taken to the International Space Station. But it was closed in the year 2009. Now three companies are working in this area, including Branson along with companies of El Musk and Jeff Bezos. It is expected that in a few years space tourism will be started again.

What will be special in space travel?
Virgin Galactic’s spaceplane is called SpaceShipTwo. It took more than a decade to prepare it. If all goes well, Branson will be in the sky for about 90 minutes. SpaceShipTwo will have a speed of 2,300 miles per hour. This flight will take off from New Mexico on Sunday, July 11 at 5:30 pm Indian time. It will also be broadcast live.

Who is Sirisha Bandla?
During this, Sirisha Bandla of Indian origin is also going with her. Sirisha Bandla is an officer associated with government affairs and research at Virgin Galactic Company. She hails from Guntur, Andhra Pradesh. Sirisha Bandla also oversees Virgin Orbit’s Washington operations.

13/02/2021/9:59:pm
Mogadishu: A suicide attacker died due to an explosion in a vehicle near an investigation post outside the Presidential Palace in Somalia's capital Mogadishu,...

16/07/2020/10:26:am
Bhopal: The incident of mercilessly beating a Dalit couple in the fold of Madhya Pradesh has created a huge political uproar. It is being...

23/01/2021/10:27:am
Washington: In the US, the new defense minister in the Biden administration will be former Army General Lloyd Austin. According to a Reuters news,...

Temples and religious places will be open in Maharashtra from Monday

14/11/2020/8:57:pm
Mumbai: The festival of Diwali is being celebrated across the country today. On the occasion of Diwali, the Government of Maharashtra has again ordered...

Whirlwind Wins Five Awards for Bridgestone India and MoneyTap at CIDCA 2020 and IDMA...