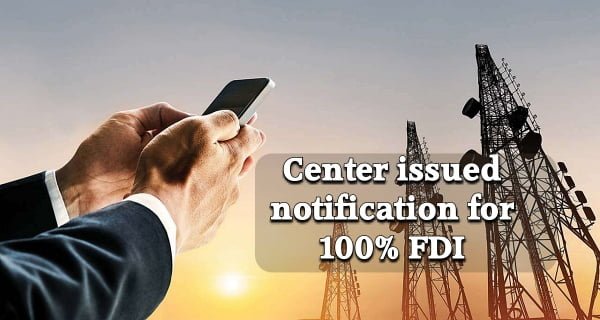 New Delhi: The Central Government has issued a notification to allow 100% Foreign Direct Investment (FDI) in the Telecom Services Sector under the automatic route. Earlier, the government had announced 100 percent FDI as part of its package for the telecom sector. To give relief to the debt-ridden telecom sector, many other measures have also been taken by the government. Telecom companies like Vodafone-Idea (Vi) and Airtel will get a big benefit from the measures of the Centre. These companies have an outstanding of about Rs 40,000 crore.

The government has recently given these facilities to the telecom sector
The Modi government has announced the calculation of dues related to Adjusted Gross Revenue (AGR), 4-year moratorium facility on the outstanding amount, and options for the government to convert the dues into equity after the moratorium period is over. the facility is provided. The Department for Promotion of Industry and Internal Trade (DPIIT) said that foreign investment in the telecom services sector will be subject to the condition of Press Note-3 of the year 2020. Accordingly, the position will not change for matters requiring the approval of the Central Government under the provisions of Press Note-3.

The bars will reopen in West Bengal

01/09/2020/10:26:am
Kolkata. The West Bengal government has given permission to open the bar in the state from Tuesday but has said that physical distance and...

Farmers’ organizations made big strategy for Bharat Bandh of 26 March

20/03/2021/11:45:pm
New Delhi: Farmers agitating against all three central agricultural laws have announced a nationwide bandh to be held next week. With the agitation of...