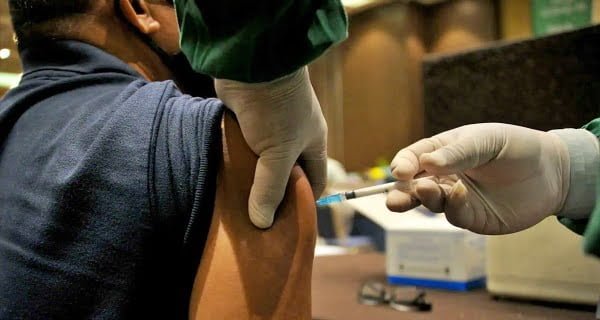 New Delhi: On the very first day of the implementation of the new vaccine protocol of the Center, India has set a new record in the case of daily vaccine, according to the data of the Union Health Ministry, about 80.96 lakh people have been vaccinated till 7 pm on the first day itself. is. The ministry says that five BJP-ruled states such as Madhya Pradesh, Karnataka, Uttar Pradesh, Gujarat, and Haryana have been at the forefront of vaccination. Till 5 pm, 13 lakh doses were given in Madhya Pradesh, 8.73 lakh in Karnataka, and 6.74 lakh in Uttar Pradesh.

The Union Health Ministry said that after improving the guidelines of the vaccination program of Covid-19, more than 47 lakh people got vaccinated on the very first day. The new policy of Covid-19 of the Central Government has become effective in the whole country from today. According to the new policy, the central government will now buy 75 percent of the vaccine itself from vaccine manufacturers and give it free to the states, while the remaining 25 percent quota will be given to the states.
Earlier, the maximum number of vaccines was administered in a single day in the early days of April, during which this figure had reached 43 lakhs, similarly on June 14, 38 lakh people had got the vaccine. According to the news of News18, the government is considering bringing its target to 1 crore from August with the help of the new vaccine policy.

Vaccination started on 16 January
The first phase of the coronavirus vaccine was started on January 16, at that time it was applied to all health workers. After this, increasing it, a frontline worker in Farveer was also added to it. The second phase of vaccination started on March 1. According to government estimates, the number of people who got the vaccine in this phase was around 27 crore. This included people in the age group above 60 and those in the age group above 45 who had a pre-existing disease.
The third phase of the vaccine started on April 1, in which the entire age group above 45 was included. Whose population according to the 2011 census is 34.51.

This was the vaccination policy in the first two phases
The first vaccination program in India started from 16 January till 30 April. During this, the central government’s policy was that it procured 100% of the vaccine from the vaccine manufacturers and gave them free of cost to the states and union territories. In the first phase, priority was given to frontline workers and those above 45 years. After this, from May 1, the Center implemented a liberalized policy, under which the center procured 50 percent of the vaccine from vaccine manufacturers, while the remaining 50 percent was procured by state and private hospitals directly from the manufacturers.

No pre-registration on cowin
It is not necessary to register first on Cowin.gov.in in the third phase of vaccination which started from 21st June. This facility will be provided to all the government and private immunization centers to the people who have come to get vaccinated there.

Air India cuts employee salaries by up to 40%

04/05/2021/10:13:pm
New Delhi: Adhaar is a 12-digit unique random number issued by the Unique Identification Authority of India (UIDAI) to all Indian residents and is...