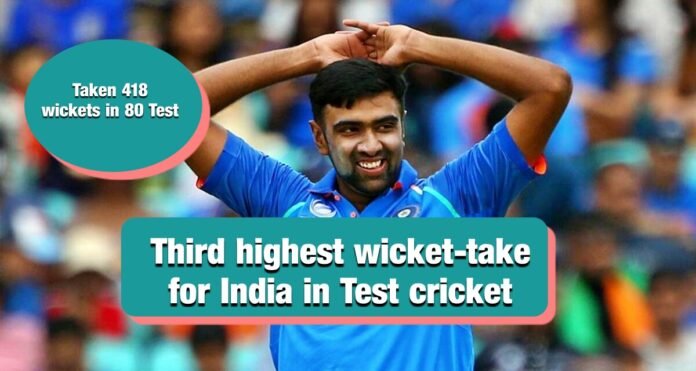 Kanpur: Off-spinner Ravichandran Ashwin on Monday became the third-highest wicket-taker for India in Test cricket. Ashwin has taken 418 wickets in his 80th Test. With which he has overtaken former Indian bowler Harbhajan Singh. Harbhajan has taken 417 wickets in 103 Tests in his career. New Zealand (IND vs NZ) needs 284 runs to win, but the path of the Kiwi team looks very difficult. In such a situation, the outcome of the match is also not clear. The match now seems to be turning towards a draw.

In the first session, Will Somerville and Tom Latham did not allow any success to the Indian bowlers, but the second session was in the name of the Indian bowlers. Umesh Yadav dismissed Somerville’s short ball just after lunch, who made 36 off 110 balls. Shubman Gill took his catch at the long leg boundary. Ross Taylor was dismissed by Ravindra Jadeja before tea. On the other hand, Tom Latham (52 ​​off 146 balls) scored another half-century which was dismissed by Ashwin.

In the morning the Indian bowlers did not get any help from the pitch. Latham didge a ball from Jadeja. India took DRS on the ball going outside the off-stump but it was clear from the review that the ball was not hitting the wicket. Ishant Sharma and Umesh Yadav also could not bowl like Tim Southee and Kyle Jamieson on this pitch.

Ishant didn’t seem to be in quite the rhythm in the first spell. He and Umesh also bowled short deliveries but Somerville did not budge. Somerville, who usually comes down to number 10, also hit Umesh for three fours, which boosted his confidence. Latham, who was five runs from a century in the first innings, played a defensive game against the spinners but also hit Jadeja for a boundary.

World Bank report became a cause of embarrassment for Pakistan

13/10/2021/1:28:pm
Islamabad: A new report of the World Bank has become a cause of embarrassment for Pakistan. It has been said in this report that...

India will get its ‘Digital Rupee’ in 2023, know what will be its benefit

08/02/2022/10:21:pm
New Delhi: India may get its official digital currency as early as 2023. It will be similar to the currently available electronic wallet operated...

Heat has broken the record in many states, know update of the weather