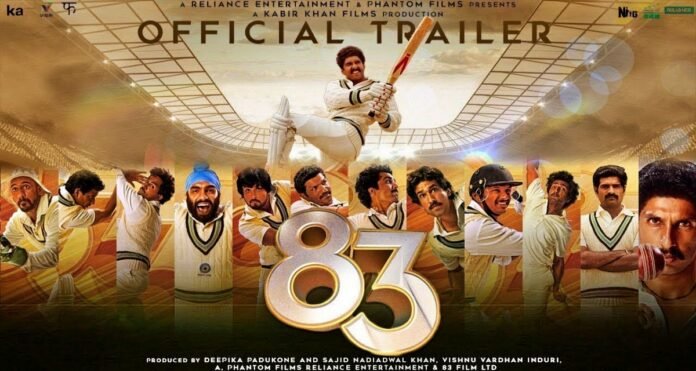 After this, a glimpse of the audience is shown, which is cheering Team India. At the same time, in the playground, two Indian players, in which one Kapil Dev became Ranveer Singh, are running to catch the ball. The public sitting in the stadium is eagerly watching that catch. The name of the film is written in the last. Sharing this teaser, Deepika Padukone wrote, “The story behind India’s great victory. It will release on 24 December 2021 in 83 cinemas.

Deepika Padukone further wrote, “The film will be released in Hindi, Tamil, Telugu, Kannada, and Malayalam. Its trailer will be released on 30 November 2021. Ranveer Singh has also shared the details of the film while sharing the teaser. This film is the second film of Deepika Padukone’s home production. Deepika is also quite excited about this.

Actor Ranveer Singh’s film 83 is one of those films, which the fans were eagerly waiting for. Recently, Ranveer Singh shared a post for his fans. In this post, he wrote- ‘It’s time … 83 in theaters this Christmas. Releasing in Hindi, Tamil, Telugu, Kannada, and Malayalam. Deepika Padukone’s pairing with Ranveer is going to be seen once again in the film ’83’. The film is based on the 1983 World Cup victory of the Indian cricket team. Kabir Khan has directed the film.

Many stars will be seen in the film
At the same time, actors like Pankaj Tripathi, R Badri, Amy Virk, Sahil Khattar, Nishant Dahiya, Dinkar Sharma, Chirag Patil, Tahir Raj Bhasin will also be in important roles. The film has been directed by Kabir Khan. The audience has high expectations from the film. This movie has been made in the wake of the World Cup trophy won by the Indian cricket team in the year 1983. The relationship between cricket and glamor has also been very old. In such a situation, an attempt has been made to show the precious moments that elevate the name of the country across the world through the film.

Dead body lying on a stretcher for nine days in MY hospital ...

15/09/2020/9:41:pm
Indore: A shameful incident has come to light in the state's largest MY hospital. The unclaimed corpse that arrived about nine days ago was...

22/05/2021/7:51:pm
New Delhi: A SpiceJet aircraft carrying the Indian Boxing Team along with Marry Kom has made an emergency landing at Dubai Airport. According to...

09/01/2021/4:24:pm
Karachi: Protests are being carried out against the killing of 11 coal miners by militants in Baluchistan Provence province of Shia Community in Pakistan....