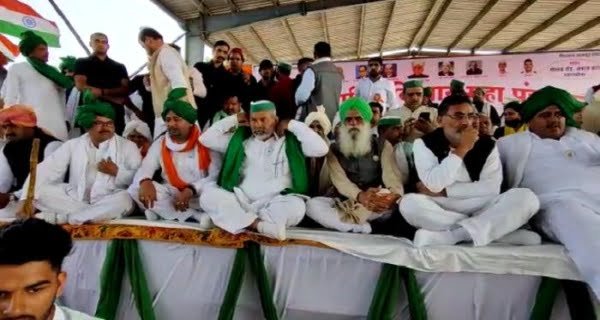 Sonipat: Rakesh Tikait, the spokesperson of the Bharatiya Kisan Union (BKU), hit back at a statement by Union Agriculture Minister Narendra Singh Tomar saying that governments change when people gather. He cautioned that if the three new farm laws are not repealed, it will be difficult for the government to remain in power. Tikait is performing Kisan Mahapanchayat in Haryana this month. In the Kisan Mahapanchayat at Grain Mandi of Kharkhauda in the Sonipat district, Tikait said that till the agricultural laws are withdrawn, the peasant movement will continue.

Agriculture Minister Tomar had said in Gwalior on Sunday that the central government is ready to talk to the farmers who are protesting against the new agricultural laws, but the laws will not be canceled only because the crowd is gathering. He urged the farmer’s unions to tell the governments which provision in these new laws they find anti-farmer.

Reversing this, Rakesh Tikait said at the mahapanchayat on Monday, ‘Politicians are saying that agricultural laws cannot be withdrawn by gathering crowds. Whereas, they should know that the crowd has the power to change power. It is a different matter that the farmers have just talked about withdrawing the agricultural law, not the withdrawal of power. Tikait said, “They (the government) should know that if the farmer can destroy his produce, then you are nothing in front of him.” He said that there are many questions. It is not just agriculture law, but electricity (amendment) bill, seed bill. What kind of laws does he want to bring?

Tikait also said that now farmers will fight on all fronts. They will also do farming, will keep an eye on agricultural policies and will also agitate. Seeking legislation for the Minimum Support Price (MSP), Tikait said, “When the law on MSP is enacted, farmers will be protected.” This movement is for him. This is for the rights of farmers.
Government’s criticism for the ever-increasing prices of petrol and diesel

Apart from this, Rakesh Tikait also criticized the government for the ever increasing prices of petrol and diesel. The farmer leader said that the current movement is not only of the farmer who grows the crop, but also of him who buys the ration. There is also that small farmer, who makes a living from two animals. There is also those laborers, who make a living from the income from the weekly market. He said that this law will destroy the poor. It is not just one law, many such laws will come.

Let us know that the agitating farmers have been protesting against the new agricultural laws on different boundaries of Delhi since 26 November. Most of them are farmers from Punjab, Haryana and Uttar Pradesh. Eleven rounds of talks have been held between the government and representatives of 40 farmer organizations, but the issue could not be resolved. Farmers demand that the central government immediately repeal all three agricultural laws.

03/10/2020
London: Britain and the European Commission will review the negotiations between the two sides on the Free Trade Agreement (FTA) after Brexit on Saturday...

WHO chief Ghebreyesus came in contact with the corona infected person, went into isolation

02/11/2020
Geneva: The head of the World Health Organization (WHO) has said that a person infected with Covid-19 will live in isolation after coming in...

Due to rising number of corona cases,full lock-down in Chennai Metropolitan Area

19/06/2020
Tamil Nadu: the full lock-down has come into effect in Chennai and its suburbs from midnight last night. It will be in force for...

09/07/2020
New Delhi: India has expressed concern over the possibility that F-1 visa students attending online-only classes in the US may lead to the return...

India gets chance to appoint lawyer in Kulbhushan Jadhav case

03/08/2020
Islamabad: Islamabad Highcourt on Monday ordered the Government of Pakistan to give India 'one more chance' to appoint a lawyer for Kulbhushan Jadhav, a...