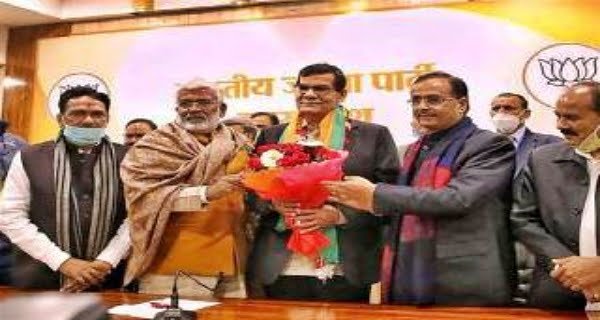 Lucknow: Assembly elections are to be held in Uttar Pradesh next year. In view of this, all the parties have started wooing the voters and strengthening their organization. Meanwhile, Uttar Pradesh President of Bharatiya Janata Party (BJP) Swatantra Dev Singh has appointed a vice-president and two state secretaries in the state on Saturday.

According to the statement issued from the BJP headquarters, State President Swatantra Dev Singh has appointed former IAS and Legislative Council member from Mau A. K. Sharma (AK Sharma) has been given the responsibility of the state vice-president. Apart from this, Archana Mishra (Lucknow) and Amit Valmiki (Bulandshahr) have also been given new responsibilities. Both have been made state ministers.

Significantly, AK Sharma was a 1988 batch Indian Administrative Service (IAS) officer of Gujarat cadre and had worked with Prime Minister Narendra Modi for a long time. After voluntary retirement, he joined the BJP, and after that Sharma was made a member of the Uttar Pradesh Legislative Council by the BJP. It is believed that in view of the assembly elections to be held in 2022, he has been assigned the post of vice-president in the organization.

know the new advisory of ICMR on corona probe, Do not repeat the RT-PCR...