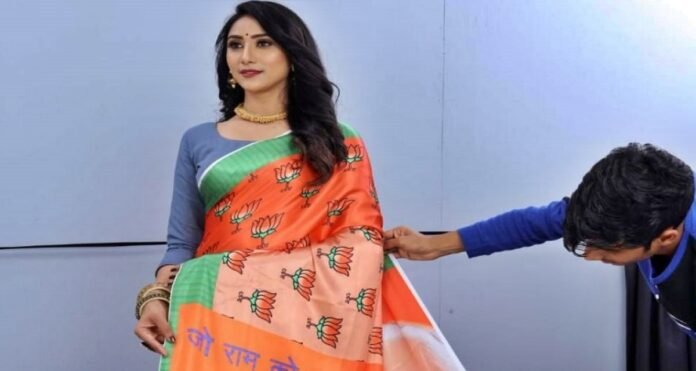 Surat: The businessmen of Gujarat are busy trying to return the power of the Bharatiya Janata Party (BJP) in Uttar Pradesh. For this work, businessmen of Surat are preparing lakhs of saris with pictures of Prime Minister Narendra Modi and UP Chief Minister Yogi Adityanath. It is reported that these sarees will be sent to the state before the elections. Elections are to be held in UP in seven phases. Voting will start on February 10. According to the schedule released by the Election Commission of India, the counting of votes will take place on March 10.

According to the report of The New Indian Express, slogans like ‘Jo Ram Ko Laye Hai, Hum Unko Layenge’, ‘UP mein phir bhagwa lehrayenge’ are also printed on these sarees. These businessmen have digitally prepared print saris, catalogs, packing boxes, and samples supporting Modi-Yogi to woo voters. However, even before this, the businessmen of Surat have been preparing and sending things like sarees, dupattas, dresses, party flags according to the orders received from the political parties. This time the businessmen themselves have thought of campaigning in UP.

Sarees bearing BJP’s symbol lotus flower were unveiled in Japan market. According to the report, Lalit Sharma, president of Textile Yuva Brigade, says, ‘For the first time in 70 years, a huge temple is being built in Ayodhya. Full credit for this goes to BJP and PM Narendra Modi. This is the reason why we want to repeat the BJP rule in Uttar Pradesh. Digital prints and 3D print saris will be made on order in Surat, which will be sent to UP. The first 1000 saris will be given free of cost to women from many communities.

Sharma informed, ‘We will send lakhs of sarees to Uttar Pradesh before the assembly elections.’ Textile trader Manohar Sihag said, ‘We have prepared digital sarees with the lotus flower symbols. These sarees will be distributed free of cost to the traders of Uttar Pradesh. Before January 1, the traders of UP were a little upset with the proposed increase of 12 percent in GST, but the Center’s announcement of postponing GST has given them relief.

NGT has now sent notices to these 14 more states after Delhi-NCR on the...

04/11/2020/10:17:pm
New Delhi: A petition has been filed in the National Green Tribunal (NGT) for banning firecrackers. The first hearing on this petition has taken...

15/10/2020/9:30:pm
Bangkok: Thailand officials on Thursday declared a strict emergency in the capital Bangkok. The protests that began under the leadership of the students turned...

LIC’s IPO in March, documents may be filed next week

03/02/2022/10:15:am
New Delhi: Investors are eagerly waiting for the Mega IPO of Life Insurance Corporation of India, the country's largest insurance company. Once again on...

Who will form the government in five states, know update related...